How to wrap a word in line without hyphen?

I m writing one article in which i need to write a paragraph full of medical terms. How can i wrap a text in a line without using line break (or hyphen)?

You can break a word with no hyphen at the end of the line (see the other answers), but then it doesn't look like a broken word. It might be a good idea to use some other symbol there instead of the hyphen, for instance $\bm\cdot$ (with \usepackage{bm}). This can be done by defining:

I strongly recommend using the package microtype too, which helps a lot here. I added a small negative \mkern after the dot, to make it protrude a bit to the right margin. 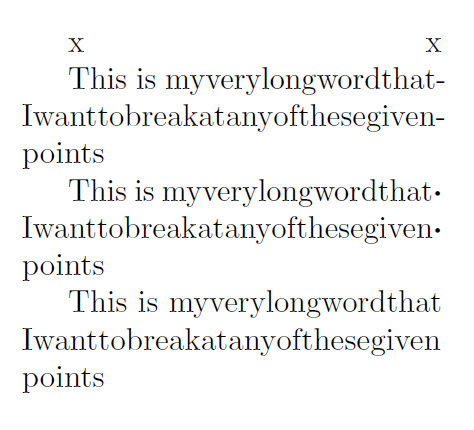 If you want to split a word but don't want a hyphen to be used where the split happens, you can define a new hyphenation style:

Now you can use it as in a\+very\+long\+word. However, this still requires to place this new non-hyphen manually.

where the three texts consist entirely of characters, boxes, and kerns. For example, TEX can hyphenate the word ‘difficult’ between the f’s, even though this requires breaking the ‘ffi’ ligature into ‘f-’ followed by an ‘fi’ ligature, if the horizontal list contains di\discretionary{f-}{fi}{ffi}cult.

this can be used for displaying DNA sequences, but probably does an alright job in your case as well

Not the answer you're looking for? Browse other questions tagged line-breaking or ask your own question.

28
How to reduce the number of hyphenation?
21
Wrapping long lines that contain no spaces
1
Typewriter hyphenation with special characters
0
Wrap long text content that have no spaces
0
Is there any macro to break a long word that is longer than linewidth and not in dictionary?

10
How to break long word containing symbols but with no hyphen?
4
How to wrap text in line by adding spaces
23
Manual linebreak with justification but without empty line afterwards
4
Adding line break without hyphen
3
How to mark soft wrap lines?
2
Discretionary line breaks in math mode and appropriate hyphen