I want to redefine the command \triangleleft so that it always has the color green:

When I use the command $\bowtie$, it complains "Missing { inserted." It is because \bowtie is defined based on \triangleleft? In that case, is there a fix?

IMHO it is not a good idea to re-define it. But if you have a reason for that: \bowtie is defined robustly as

So you can do the following:

Notice that I put the new \triangleleft inside \mathbin to make it a binary operator, conserving the spacing of the original one. 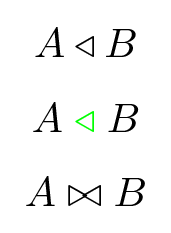 Redefining commands always carries some risks, if that command is used by other ones. This is one case.

There's no general rule, unfortunately, for telling whether a redefinition can harm other commands. You've found that \triangleleft is used by \bowtie and it's almost obvious that there's a problem, because \bowtie is defined by

in fontmath.ltx. What you should do is thus

and \bowtie will use the "uncolored" triangle.

However, I don't recommend this path. Rather, define a new command for the green triangle, reflecting its intended meaning.

If the green triangle left is to be used in the same way as the black one, I suggest to declare it as a binary operation (\triangleleft is a binary relation symbol):

6
How to typeset mathematical symbols (with index, etc) always the same way and easily?
45
Typesetting the “define equals” symbol
7
Definitions of mathematical terms and declaration of symbols
9
How to redefine the section symbol (§)?
5
Capital Omega problem, I can not renewcommand it
4
Combine universal and existential quantfiers
0
`centernot` conflict with the rest of packages
3
How can I programmatically convert Greek symbols to lowercase in LaTeX?