How to make a circular arrow have the same size and position as other circular symbols?

I'm using the mathabx package's circular arrows; however, since I otherwise prefer the usual amsmath symbols, I'm following the setup described in Importing a Single Symbol From a Different Font to import only the circular arrows.

This is what is produced: 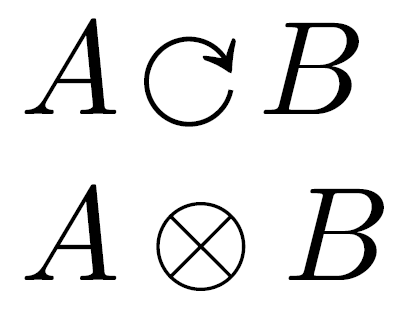 As you can see, they are not lined up, even though I put the circular arrow inside \mathbin{}. Since I know that fiddling with \hspace and \raisebox is not fully "proper", and won't scale with changes to font or font size, my question is:

How can I make this circular arrow agree with other circular symbols like \oplus and \otimes, in a way that will scale properly? Is there a way to figure out the exact value needed to give to \scalebox to get the circular arrow to be the same size as an \otimes?

Incidentally, I suppose this raises the mathematical question of whether the circular arrow is to be considered a relation or an operator. In my context, I am using

to mean "A acts on B". For example, we might have a group G acting on a space X.

Can any mathematically-inclined people give their opinions/reasoning for whether "acts on" is a relation or operation, and hence whether I should instead be giving the circular arrow a \mathrel or a \mathbin spacing?

You loose horizontal space by scaling it at 0.9 of its original width. Besides that, I have defined the original \rcirclearrow as an \mathbin. The 0 you put there made it an Ord atom.

Putting the new symbol inside a box wide as the \rcirclearrow symbol you can achieve good results. 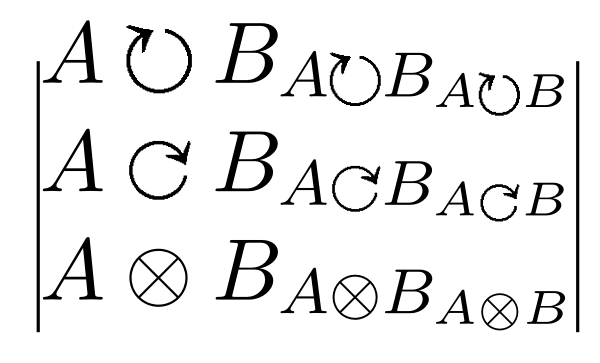 Not the answer you're looking for? Browse other questions tagged spacing symbols or ask your own question.

715
What do \makeatletter and \makeatother do?
103
Importing a Single Symbol From a Different Font
60
\subseteq + \circ as a single symbol (“open subset”)
36
The mysteries of \mathpalette

6
How to typeset mathematical symbols (with index, etc) always the same way and easily?
1
How to make some text take up the same amount of space as other text
5
How can I type the Mathematica symbols “Distributed” and “Conditioned”
3
How can I include a symbol with correct size and relative position without directly using it?
7
How to put symbols of equal size on top of each other?
4
Problems with '\rightrightarrows' and other a arrow symbols
4
Scale three symbols to the same size
3
Uniform convergence symbol (arrow on top of arrow, same size)
2
How to reduce the spacing above and below math symbols?