How can I fix a problem where italics prevent line breaking when using microtype? [duplicate]

I wish to use protrusion and expansion from microtype as I like the look you get with them. I use amsthm and typeset theorems in italic as usual (with \theoremstyle{plain}). With microtype enabled, LaTeX fails to break some lines where the last item on the line is something in italic. I get three failures to break nicely with my included example.

I have microtype 2.5 and use lualatex with Latin Modern Roman. I have a working example, though it's not very minimal. If I remove much more the ancillary changes to formatting hide the problem I suspect is a bug. The issue doesn't seem to be with the fact I'm using hyphenated words like Erdos-Hajnal, since the line break failure also occurs on other lines, and problems even occur in my bibliography where some portions of the reference text are in italics. The problem also occurs for me if I remove the \usepackage{fontspec} line. If I remove that line and compile with pdflatex there are no problems.

EDIT: this is clearly nothing to do with amsmath, and a simple way to reproduce a similar italic-linebreaking problem is with:

This is indeed (as @yun suspected in his/her first comment to the question) again the bug in luatex with negative protrusion values. The relevant difference between version 2.4 and 2.5 of microtype is not in the package itself but in the configuration file for Latin Modern Roman, which now specifies also negative values for the italics font (which was suggested by @Hendrik Vogt on this site). Now, there are several possibilities:

Seems to work fine for me in all three variants XeLaTeX, LuaLaTeX and pdfLaTeX with fontspec removed. 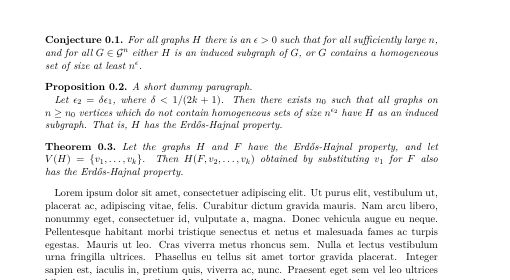 To debug properly these problems, use \listfiles and upload them. Also microtype and fontspec have config files, so you need to check these.

If you use lipsum also use latin in babel.

Not the answer you're looking for? Browse other questions tagged line-breaking luatex italic microtype protrusion or ask your own question.

14
How to prevent LaTeX from line-breaking a phrase?
11
Prevent line-breaking after short words
9
How do I enable protrusion for footnotes with \fnsymbol using microtype?
3
TeX4ht - prevent line breaking in HTML?
9
How can I make my dash work with microtype?
6
Fix overfull line by local settings of microtype expansion
2
Microtype problem with line-endings
5
breve under letter is not in italics when using \textit
7
Microtype package produces warning when using LuaTex