Tikz: intersection of line and plane 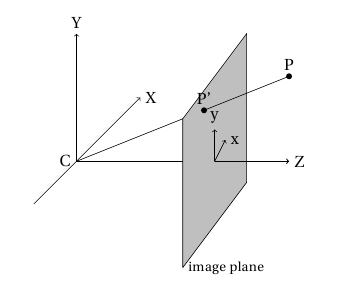 Right now I solve this issue by plotting the line in two segments.

However, I believe there must be an easier solution to this problem, as this now requires quite some annoying hand calculations. So my question is:

What is the easiest way to draw a line that is intersecting a plane?

Doing this automatically in TikZ is complicated because TikZ is not a 3D-aware package. It draws things in the order in which you draw them with almost no capability for automatically removing stuff that is "behind" something already there. There are "layers", but these are just a way of re-ordering the things that are drawn and don't get round this fundamental problem.

So when you have things like the z-axis and the line which have parts drawn before and after the plane, you have to draw them in two pieces. I know of no way around that (even using clips still requires them to be drawn twice). And so you need some way of telling TikZ where to make the break. As it is fundamentally a 2D-package, it doesn't know how to compute the intersection of the line and plane and so doesn't know when to stop drawing the line. So you have to tell it.

So here's how I'd draw your diagram using 3D coordinates. Since your frame is not the usual TikZ frame (basically, you've rotated around the y-axis) I needed to adjust the frame at the start. Don't worry overmuch about this bit.

Then the main thing is sorting out which bits are drawn behind the plane and which in front. Now, I have used the layer facility of PGF here which allows me to jiggle around with the order in which things are drawn relative to the order in which they are specified. This means that I can keep the two pieces of, say, the Z-axis together in the code making it easier to maintain. For this, I've borrowed code from "Z-level" in TikZ (the author said I could) to make the code for the picture simpler. All the stuff in \makeatletter ... \makeatother could be gotten away with at the expense of more crowded picture code. 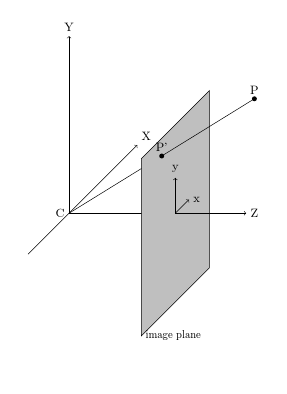 Not the answer you're looking for? Browse other questions tagged tikz-pgf pgfplots 3d or ask your own question.

2
How to draw parallel capacitor plates
2
Asymptote: Intersect Line with Plane, z-order not correct
1
Plot and plane and vector

6
How to find the intersection point between line and plane in tikz-3dplot?
6
TikZ/ERD: node (=Entity) label on the inside
18
TikZ: Drawing an arc from an intersection to an intersection
9
Plotting intersection of a sphere with a plane
9
Line up nested tikz enviroments or how to get rid of them
6
Tikz image within a defined box (& the textpos package)
5
TikZ: Perpendicular line in a plane (3D problem)
1
How do I change the radius of circle in a node in tikz style?
3
Document header with tikz