Sans serif font with distinguished capital I for math.

I work a lot with matrix algebra. I also give a lot of presentations. It'd be nice to have a good sans serif font to use for both. Currently, my choice is the bitstream vera sans with math package: arev.

The problem with most sans serif fonts for matrix algebra is that they do not have a good capital I. In these presentations, 'I' really needs to have it's tails, even in a sans serif font. (It's the all important identity operator after all.)

This seems to be a recurring question (see http://groups.google.com/group/latexusersgroup/browse_thread/thread/6f3853c13e295538/32fc03a336b8afd5 and http://thedailyreviewer.com/compsys/view/distinguished-capital-i-for-sans-serif-font-113312512)

Relative newcomers to the TeX world are Google's droid fonts, but a package was recently put on CTAN. It has the feature you want for capital I.

This is an old question, but it's exactly the question I have today. I'm not sure if Droid now has a true italic, but it's worth noting Noto Sans: 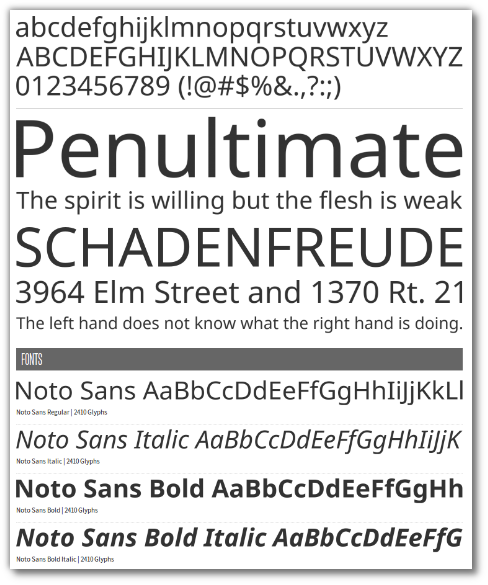 It is based on Droid, and there is a corresponding serif. Probably this is old news here, but the Noto project's "design goal is to achieve visual harmonization (e.g., compatible heights and stroke thicknesses) across languages", with planned coverage for "all living scripts in Unicode by the end of 2014". (Note 2,410 glyphs in the Font Squirrel version.)

Based on droid answer from @frabjous Thanks for the suggestion of Droid. I really like that font too. I wish it had a real italic though. Anyway, I've decided to do something naughty and combine the droid capitals with some of the arev symbol for math.

At large-ish sizes, arev is just a little bit bolder than droid, but they combine rather well. For math excepts in a presentation, they seem better matched than most presentations I see, and a few quick tests show most people don't find it objectionable (or really even notice). It isn't perfect, but it'd good enough for now.

This script is based on the comments here: http://www.charlietanksley.net/philtex/matching-math-fonts-to-text/ (Thanks again to @frabjous)

I decided not to use the full mathastext and only use the droid capitals for match and arev for lower-case math (to get the flowy i's and j's).

Verdana is a sans font that has serifs on the capital i.

This seems to be a valuable "I-bar" Q&A, so I note also now Andika New Basic, a font optimized for legibility that has this feature: 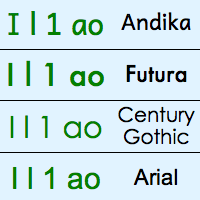 The font exists in a full "family", as seen at FontSquirrel: 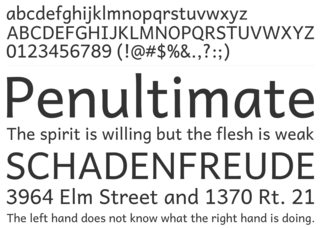 It's really grown on me. It also has impressive glyph coverage (927 in each style). I'm not sure whether it has limitations for use in maths contexts, and it would need to be used with XeTeX or the like, I suppose. Still, worth noting here (I think!).

You can try bodoni which has very subtle serifs

You also check out the font catalogue.

Not the answer you're looking for? Browse other questions tagged fonts math-mode presentations sans-serif or ask your own question.

48
Is there a sans-serif font that appears different for I (capital i) and l (small L)?