The output of eps fig is rotated by itself

I am trying to use an .eps figure for my paper, but the problem comes when I got weird output.

I use this command:

But on the output, the figure is rotated by itself. A.eps is a landscape figure, but it came out as a portrait figure.

I tried to rotate it so it might be come out as I want, but it did not work.

Can anybody help me, please?

From comments to a different answer, I gather that you want to include plots generated with gnuplot.

Gnuplot comes with many different "terminals", which are output filters that generate different file formats. A common one is postscript (which generates postscript files), or png for generating PNG raster images. If you build your plots interactively from a gnuplot command line, you are probably using the wxt terminal, which outputs the plots to your screen.

For including gnuplot plots in LaTeX documents, there are other terminals that are better suited than the terminals which generate standalone image files, because they let LaTeX take care of typesetting the text:

Here's a complete example using the epslatex terminal:
In gnuplot:

A minimal LaTeX document to include the output from gnuplot could look like this: 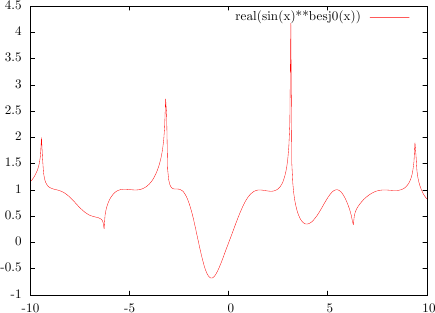 Just a general comment from someone who doesn't use LaTeX often:

graphicx with its \includegraphics is generally preferable to epsfig and PDF is generally to be preferred over EPS.

\includegraphics allows you to leave the image format open in the LaTeX source code, and to pick PDF instead of EPS by using pdflatex instead of latex (once you've converted your images to PDF). This has saved me a few headaches in the past.

I just had similar issues with rotating eps figures. Check out this thread: On Ubuntu 10.10 with texlive-full installed, xelatex is rotating my figures 90 degrees counterclockwise

If you are using dvipdf then try making your command line

8
On Ubuntu 10.10 with texlive-full installed, xelatex is rotating my figures 90 degrees counterclockwise