How to remove diaeresis after hyphen

In Dutch, spellings such as coëfficiënt are necessary because the digraphs oe and ie normally represent the simple vowels [u] and [i], respectively. However, hyphenation is now preferred for compound words so that zeeëend (sea duck) is now spelled zee-eend.

Because the diaeresis is used to indicate that two letters should not be read as a digraph, it should be removed when this is indicated in an other way (a hyphen at a line break, for example). There are still cases where hyphenation removes the diaeresis: ‘financiën’ should be hyphenated as ‘fi-nan-ci-en’.

The language-specific options in the Polyglossia manual do not offer a solution to this problem. The Babel manual mentions the \@trema macro, and indeed, when using pdfLaTeX and Babel, financi"en is hyphenated correctly (removing the diaeresis) at line breaks. I did find this ugly hack, but I am convinced there should be a better solution.

If all “ë” just mean this, then a possible workaround is to redefine the meaning of ë to be "e:

The \parbox{0pt}{...} is a trick for telling TeX to hyphenate as much as possible. 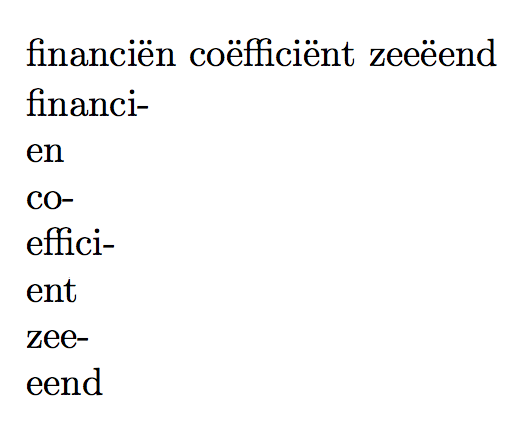 With XeLaTeX you can use babel in the same fashion, just remove the calls to fontenc and inputenc.

If you want to use polyglossia, then here's a way:

Not the answer you're looking for? Browse other questions tagged hyphenation polyglossia or ask your own question.

15
Adding letters in hyphenation of Swedish words
3
LaTeX Macro for “code” style, underscore package and hyphenation
6
Translation not working when using siunitx + glossaries + polyglossia + xindy + LuaLaTeX
13
No hyphenation in TOC entries, please
0
LyX Hyphenation Not Working
6
Portuguese: line break at an hyphen in an explicitly hyphenated word
6
Can I have an “almost-non-breaking” space in LaTeX?
0
In Brazilian Portuguese, how to get repeat hyphens when hyphenating already hyphenated words with Polyglossia?
3
Allow hyphenation of dashed words & if hyphenated on the dash, add another dash in next line