I got the following messages when updating TeX Live 2012 using the provided GUI.

Meaning: this package is referenced as dependency in one of the collections, but not present. This can normally only happen by calling tlmgr remove --force. Sometimes when a tlmgr run is interrupted similar things might occur.

Fixing: To fix the problem you can run

to reinstall a single package or

to reinstall every forcibly removed package, or use the GUI.

Background: package dependencies are tracked but not enforced once broken, that is we allow users to remove packages even if they are referenced somewhere. Normally there is no need for that, though.

Reinstall previously removed packages check box must be selected to solve this problem. Then press update all installed button. 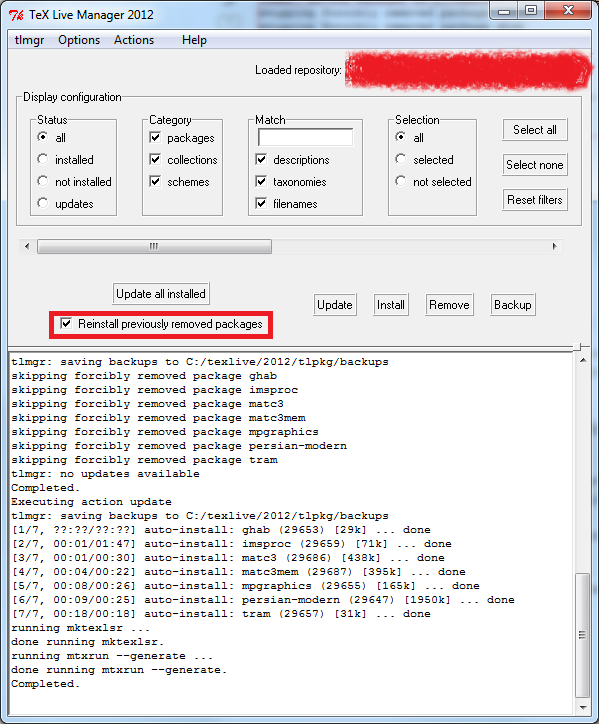 Not the answer you're looking for? Browse other questions tagged texlive updating or ask your own question.

1
“Installation of new version of xxxx failed, trying to unwind” messages when I update TeX Live 2016
0
atbegshi.sty not found

35
TeX Live 2012 - what should be known about it?
2
Gummi Not Using TexLive 2012
30
What does “restricted \write18 enabled” mean and why does TexLive keep reporting it?
126
Why does TeX Live “require” yearly updates?
41
TeX Live Manager crashes with “Unknown docfile tag”
1
“Installation of new version of xxxx failed, trying to unwind” messages when I update TeX Live 2016
0
lato package unable removed from my “TeX Live Utility”
14
tlmgr: unexpected return value from verify_checksum: -5