How can dramatist verse speech prefixes be put on the same line as speeches?

Using the verse environment from the dramatist package, I would like to have the speech prefixes on the same line as the speeches, as they are for the prose environment.

There are a number of hooks for customizing the formatting, but I can't see how they can be used to do this.

This is related to this question, but I'm not trying to mix prose and verse, so I hope there is a simpler solution. I'm typesetting a long verse play, so it would be very inconvenient to have to wrap every speech in its own environment.

If you want both environments to treat the prefixes in the same way, you can then omit the conditional branching: 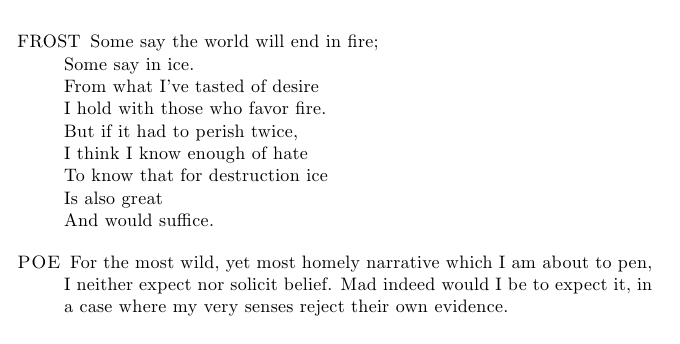 Not the answer you're looking for? Browse other questions tagged formatting dramatist or ask your own question.

1
Misplaced label mixing list environments
1
How to change the color of \StageDir in Dramatist?
1
Wrap a verbatim table environmet
2
dramatist remove spacing between speech items
3
LaTeX output custom commands used in current section
1
A simple way to typeset preformatted text blocks or pseudocode
8
What is the recommended way to have two characters speak simultaneously?
0
Changing the bibliography heading style with `apacite` and the `letter` document style