Integration of arara in Texmaker

A small introduction with pictures would be nice :-)

One has at least two options, defining a User command, or using Quick build. There is no difference between Windows and Linux (AFAIR, I'll check later), can't say about OS X.

Edit one of the free commands, give it a reasonable name, and use

as the command. % is a placeholder for the filename without extension, as mentioned in the dialog:

The Quick build is defined in Options ⭢ Configure Texmaker ⭢ Quick build. Choose User, and type the same command as above: 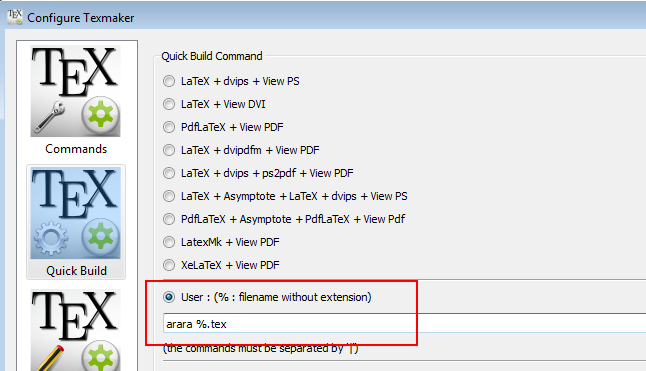 Not the answer you're looking for? Browse other questions tagged texmaker arara or ask your own question.

20
How do you configure Texmaker to use LuaTeX?
17
Configuring TexMaker and BibTex
10
Shortcut to compile the .tex and .bib in one go with Texmaker?
14
Output Filename
6
Multibib compiling multiple .aux files
2
Using glossaries package with Texmaker (running PDFLaTex)
5
How to arrange references at the end of each chapter (in a Thesis)?
1
Arara and latexindent with texmaker
4
arara with indent.yaml works in command line but not in TeXmaker
3
Multiple Quick Build Options
see more linked questions…

10
Structuring a document using comments
1
arara and French
2
arara: How to fix ghostscript.yaml due to arara - version 4?