When producing a PDF from the following example using pdflatex, I get different results between Adobe Reader and TeXworks. I think this is a bug in the way that Reader handles opacity/transparency.

My goal is to have just a small space between the black node and each edge (like how TeXworks is rendering it), and the way I'm doing that is by setting a black fill and color=transparent/opacity=0 edge for each node.

Can anyone suggest a nice workaround to get consistent results? I have many trees I am trying to render that suffer from this issue and I would like to have the space between the edge and node be transparent rather than white.

Maybe I can draw fully transparent nodes, and then draw a smaller black node on top of each of these. Can this be automated as part of the state syle? Or can I set a gap between the start and end of every edge? (How would I do this?)

Comparing the rendering in TeXworks to Reader: 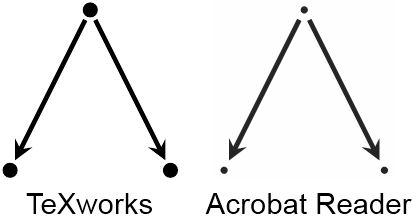 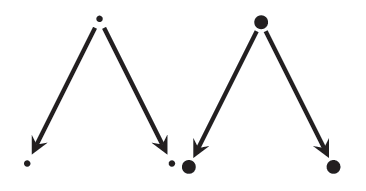 Not the answer you're looking for? Browse other questions tagged tikz-trees viewers transparency or ask your own question.

210
Should \tikzset or \tikzstyle be used to define TikZ styles?

7
Custom sibling angle for child nodes
2
Tikz-Tree: Arrow-style depending on parent node
1
Adjust edge endpoints depending on node label
1
How can I draw a tree like in the image?
4
Resolution trees in latex
13
Relative transparency in TikZ?
1
Use tikz to draw a hierarchical model (mult-level model from statistics)
0
Fandol fonts not rendered in TeXworks PDF viewer
4
Tikz equivalent for pst-rputover