My pixel perfect picture gets blurry when compiled in LaTeX

I have this picture: http://dl.dropbox.com/u/3394117/Temp/fig1.png (I have the original in Pixen and could export it to several different formats. I went with PNG though since it's lossless.)

When I open my picture in Preview (OS X) and zoom in, it looks fine. The characters have extremely sharp boarders between them and the background. However, when I put it into my LaTeX document, compile it to a PDF (using TeXShop) and then zoom in, it suddenly have gotten blurry (see screenshot: http://dl.dropbox.com/u/3394117/Temp/Screen%20shot%202011-02-13%20at%2012.46.30.png).

In the end, I would like to be able to scale the picture freely without there being any blurring at all.

This is just an effect of the display settings of your PDF viewer. In Acrobat Reader 9, for example, there is an option "Edit | Preferences | Page Display | Smooth images". If you uncheck this box, the picture will not be anti-aliased. When printing, your image should look fine regardless of the smoothing effect you see on screen.

Here's your file in Acrobat Reader 9, zoomed to 800%, left half with the default "Smooth images", right half with the option unchecked. Note the tick mark and the red X: 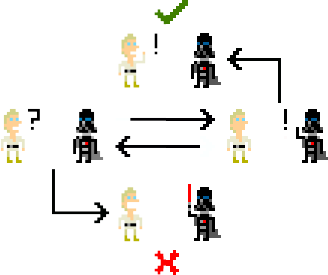 One option for forcing a pixel-perfect image in pdf viewers with unreliable interpolation settings is simply to scale the image up by a few multiples without interpolation, so that each pixel simply becomes several pixels on the new image. Then in latex, set the image scale to the inverse of the multiplier.

So, in the example below, I took the original, pixel-perfect image and scaled it up by 4x so that the result was 4 pixels per pixel in the original image. I then set the include scale to 0.25:

This isn't perfect, but it is an improvement.

The reason this works is because the pdfviewer still does image interpolation as usual, but it does it over a larger image. So most of the "pixels" are now several real pixels wide, and mainly get blurred with themselves, so the apparent amount of antialiasing is smaller.

Here is a comparison on my system of the PDF output side by side with your original PNG. The PDF is on the left and the PNG on the right. I can see some slight differences, but I would not describe the PDF as blurrier. 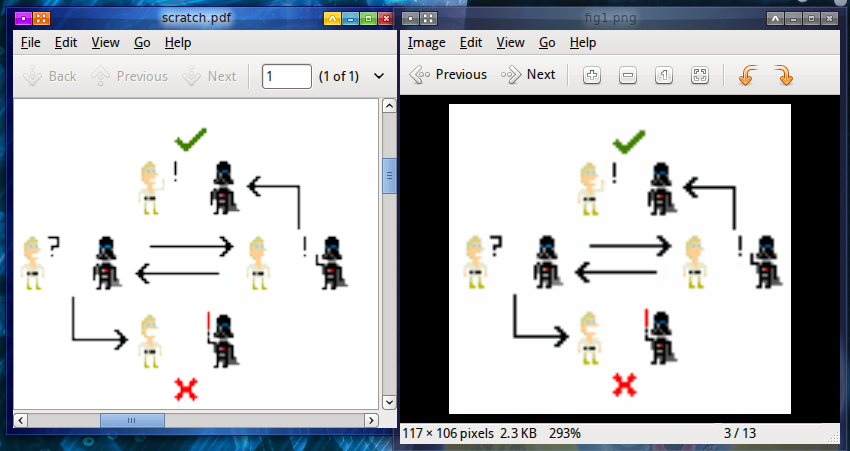 PNG may be lossless, but it's still a bitmap format, and hence will look bad when zoomed in on, especially for a very small image like yours. Does Pixen have the option for exporting to a vector format, like EPS or PDF (or SVG, which you could then convert using other tools)? That would be better than PNG.

If file size does not matter, the best solution is arguably to upsample the image, for example using ImageMagick:

You can install ImageMagick on macOS using Homebrew:

You can also use batch processing in the current directory using a loop like this:

Ok. I got it to work now. It was ugly but it works.

What I did was the following. I zoomed in on the picture in Pixen so that it covered my entire screen. I then took a screenshot, imported it into Pixelmator and exported it as a png-file.

Now it looks great! It's not until you zoom in really, really far that you notice the blurring.

It would be neat to be able to zoom without getting any blurring at all. Maybe I should do vector pixel art next time (I'll see if InkScape can fulfill my needs).

A similar problem is being discussed in this thread.

I have found a solution on Inkscape forums. Open the PDF file in a text editor, and locate the following line:

Change it to the following:

This should stop the blurring.

Not the answer you're looking for? Browse other questions tagged graphics pdftex png bitmap or ask your own question.

5
Can I disable interpolation (enable nearest-neighbor filtering/upsampling) with \includegraphics?
3
Switch off anti-aliasing in bitmaps
2
Why are my images blurry in pdflatex?
0
PGFplots plot RGB image from data (to avoid Apple Preview anti-aliasing)
1
Print screen img - png/eps loses quality with no scaling
49
Included PNG appears blurry in PDF
63
How do I insert an image in LaTeX so it looks good on print?
17
Deactivating Anti-Aliasing when typesetting QR-Code
10
Losing resolution when using \includegraphics to import JPEG.
8
Image quality using PDFLaTeX
See more linked questions