Starting a line where the previous line finishes

I have been using LaTeX for standard things like letters and scientific reports. I recently came to visit my grandmother who writes some poetry and told her I could make a nice pdf from her handwritten verses -- which I start to regret :P... I used the package verse and it is going all right, but in some specific poems, she wants a very 'exotic' kind of positioning. She wants some lines to start exactly where the former line finishes like in this example:

Do you know how I could, for instance, write a magic command \magicom{} that would generate the text above when used like:

Standard TeX has one way to measure the last line in a partial paragraph, it is a bit sneaky but there you go. At least it makes coding inside the document then nice and easy: normal line breaks with \\ and special ones with \magicom. This allows even for some lines to be automatically broken.

This then gives us:

If we uncomment the verse environment above and use

we get the following:

What does the code do?

The tabbing environment provides this functionality where you designate the tabs via \= and skip to them using \>: 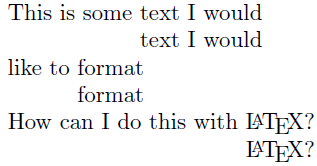 For completeness, I've doubled the content so you can see the tabbing is at the appropriate horizontal location. More help on the use of tabbing is available from TeX Blog.

I think it's simpler (and takes less markup) if you think of it as lowering the rest of the current line rather than making the next line start where the last one ended. 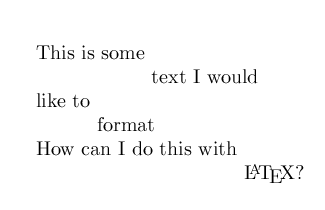 And, of course, there's a solution using \tikzmark. Use \Contline at the end of a line where the effect mut be applied; for example, your text can be produced simply with

For example (you can comment the line beginning with \leavevmode). Let us observe, that no duplication of text is needed, as in some other solutions. 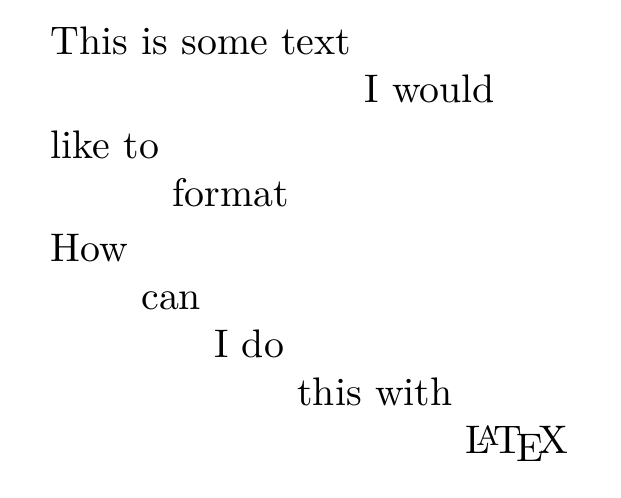 With the tabto package. You may want to group-limit the scope of the \\ redefinition. 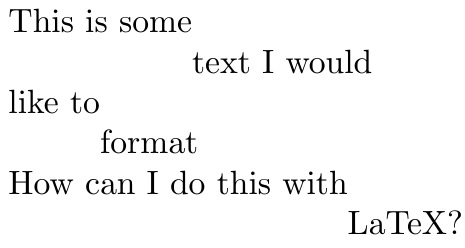 If one didn't have to worry about double line breaks, \\\\ or if one wanted to collapse multiple adjacent line breaks into a single line break, then this is even easier. The following definitions produce the same result as above because there are no multiple line breaks.

The sextet of Yeats’s sonnet "Leda and the Swan," has such a broken line:

Not the answer you're looking for? Browse other questions tagged horizontal-alignment indentation verse poetry or ask your own question.

1
Getting the length of the last line of paragraph w/o producing vertical space
11
How do I make a sentence vertical in the middle of a horizontal sentence?
13
How to get the natural width of the last box in a paragraph?
5
how to align multiple lines on same indent without enumeration?
3
How to compose poetry with LaTeX

5
Running heads containing verse line numbers?
4
Tabbed enumerate that is aligned with previous line
5
LaTeX verse package no indent for the poem
3
Regulation of the distance between the first verse and the previous paragraph using `verse`
2
Verse in memoir produces an unwanted extra empty line when the previous one is full
1
Alignat, but starting at the left
0
Unwanted line shift
0
No indentation in ongoing line in Verse environment