When i use the moderncv package i get the typical marvosym symbols.

The following image shows the file examples\template_banking_red.pdf that comes with my moderncv package. When you take a look at the template_banking_red.pdf from this host it features different symbols for mobile/phone/mail and also additional github/linkedin/twitter symbols. I just updated my texlive yet i still obtain the old symbols.

What do i have to change in moderncv to obtain the latter result? 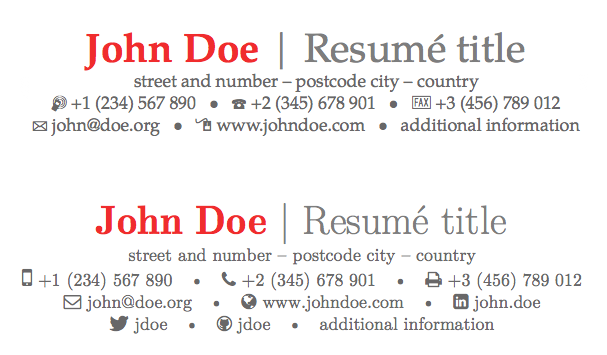 This is the default behavior since version 1.5.0 for the casual style variant (the one you pictured), released today. It is using the fontawesome package as stated in another answer, and will load it automatically.

FYI, the new version of moderncv introduces a way to switch between icon sets, i.e.

where <icon set> can be awesome (the one you wants), marvosym (the old ones) or letters (letter icons, used by default in the oldstyle style variant).

Unfortunately, TeX Live 2012 is frozen right now and TeX Live 2013 will only be released on July 1st. So if you want the icons above, you will need to download the newest version of moderncv manually (fontawesome should already be installed on your system, as it was released before the freeze).

Not the answer you're looking for? Browse other questions tagged symbols moderncv or ask your own question.