When defining a new section or when adding a caption to a figure or a table, the content of that command is normally duplicated. One version is put directly into the text, i.e. as a heading or below a graphic, and one version often appears in a list, i.e. in the table of content or in the list of figures.

If both versions should be differently, the necessary commands have an optional argument which can be used to define different content for theses lists than for the normal text, e.g. \section[list content]{text content}. Sometimes I use a macro in the text content, which should not be part of the list content. Of course, I can always duplicate the text content and add a list content without the macro, e.g. \section[content]{\mymacro content}, when I do that in my own document. But as I need the functionality for a package, the users cannot (and should not) be forced to do that work themselves, thus I wonder how to avoid this.

The hyperref package has a macro \texorpdfstring which solves a very similar problem by putting different content into the PDF's table of content (bookmarks) than into the file. There also is the macro pdfstringdefDisableCommands, which gives a possibility to remove macros from the content. Redefining all the \section and caption commands to (locally) redefine \mymacro to an empty macro is probably not very practical, as there are so many commands. What would a good solution to the problem look like? Is there already a package or a command which removes macros from such lists? 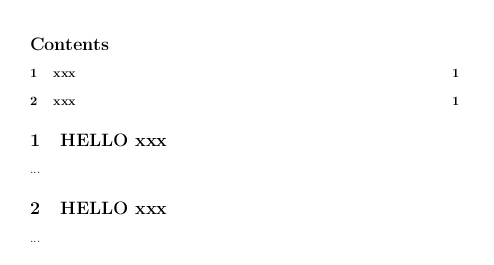 Not the answer you're looking for? Browse other questions tagged macros table-of-contents or ask your own question.

13
“etc.” abbreviation macro gives error when used in caption
30
How does one append material to a token list?
14
Macro saving a value for next run
4
Customising list of tables to include “table” word
23
Combined List of Figures and Tables?
6
Vertical space before list environment within a macro
6
Iterator-like command, where each use expands to an item from list defined earlier
6
list of figures and tables when there are no figures or tables?
2
Remove dedication from contents section in latex