A similar problem seems to have been discussed at Drawing parallelogram with fixed angle, width and height?, but I don't see an answer in there, only talk about why the obvious thing doesn't work, which frankly I don't care, I'm only interested in what to change so that it does work. (One clarification, though: these trapezoidal bars need to be nodes so that they can be addressed in the larger document, for labeling and so on. Also, I'm setting the size of the node with \rule because when I tried to do it exclusively with minimum width I got division-by-zero errors. It appears that a trapezium node cannot be empty.)

One possibility would be to use text width to control the width; using one argument for a new mytrap style, you the can use the style like this: 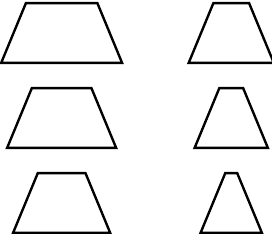 see pag. 422 of the TikZ manual (there are more chunks of code you could remove, I left them there since I was not sure you actually need them for other purposes)

7
Drawing parallelogram with fixed angle, width and height?
5
TikZ: trapezium angle with two text lines
2
Drawing this figure on latex
4
Referencing a node for use in postaction

10
Triangle node with adjustable height
7
Drawing parallelogram with fixed angle, width and height?
17
How to define the default vertical distance between nodes?
2
TikZ trapezium issues
5
tikz: fitting width of node but automatic height
3
Why does minimum height of a trapezium node affect also the width?
5
TikZ: trapezium angle with two text lines
0
A label in color box with fix width and height