How to compile the source code of TeX

I am more and more interested in the system TeX (and LaTeX) and I want to study it more deeply. I am not telling that I want to learn how to use it, but I want to understand its mechanism now.

The first thing that I can imagine is to download its source code Plain Tex. But

...the current TeX software is written in WEB, a mixture of documentation written in TeX and a Pascal subset in order to ensure portability... (Wikipedia)

I am an amateur C programmer with a little experience of Win32 API, and I always use Microsoft Visual Studio to do programming.

I have totally no idea what to do next with the souce code above, for example, compile it and get outputs (on Windows and on Linux), use the outputs to compile a .tex file and get the output.

Can some expert(s) talk and explain a little about this beautiful sytem, or, at least, tutorials about how to build it, please?

You are linking there to plain.tex which is a file written in TeX not the source of tex-the-program (which is tex.web)

These days if you want to compile from source it is probably best to start with a full download of the texlive build sources.

The sources are at

and that page has hints about where to start if you want to compile. See in particular:

David Carlisle explains how to compile the sources for the modern versions of Tex that are the basis for Texlive (Pdftex, Xetex, and Luatex, among others). These derive from Karl Berry's Web2c fork of Knuth's source code, which is a mechanical way of translating code Web sources to C code that can be compiled just about anywhere.

If you want to compile sources that are closer to what Knuth wrote (and documents in The TeXbook), take a look at:

I was somewhat intrigued while building TeX from its sources, since some of these depend on others to be built and installed. Knuth wrote these programs in the WEB language (WEB is only remotely related to the last W from CERN's WWW). WEB programs are converted to Pascal sources by tangle and to a TeX input file by weave. Of course, tangle and weave are WEB programs as well. So one needs tangle to build tangle---and weave and TeX to read a beautifully typeset WEB program. But don't despair, I cut this indefinite recursion and provided tangle.p, the Pascal source of tangle, and tex.pdf. It shows what, why and how I changed Knuth's program.

His tex.pdf documents in minute detail these changes.

The original sources for TeX (and friends) can be found on Knuth's CTAN. All the sources have very comprehensive documentation, but trying to compile them is still an epic task.

TeX is written in WEB, a programming language invented by Knuth. So first we're going to need WEB.

Note that if you want to read about the implementation of any WEB program you can use weave and TeX to produce copious documentation; this is a good starting point to Knuth's code. (For TeX and Metafont you can buy a printed version of the WEB output as Computers and Typesetting volumes B and D respectively.)

Now we need to talk a little about the dialect of Pascal the Knuth uses, which he calls Pascal H. TeX was written before Pascal was standardised; to my knowledge no native Pascal H compiler exists and it is not compatible with modern Pascal compilers. However Knuth wrote the programs in a relatively portable way so it's only moderately Herculean to port them. At this point you have some choices:

Now if you can do this the actual process of initialising and running TeX (initex, fonts, etc.) will be relatively easy; make sure you validate your build against TRIP (see the TeX sources). If you're feeling adventurous do the same for Metafont, the TeX tools, Metafont tools, and WEB.

About the design of TeX and Metafont: these programs were designed by Knuth to be highly robust, efficient and portable in the late 1970s. Today programmers take for granted the speed of modern processors and programming standards that allow them to write adequately functioning programs much more quickly. Much of what happens in these programs (e.g. carefully enumerating character codes, statically allocating memory at compile time, on-line error recovery) rarely happens in today's programming; and many of the modern annoyances (having to compile LaTeX twice for back references, difficulty with fonts, the intricacy of the macro language) are a result of these design goals and decisions. I wouldn't advocate Knuth's methods for most projects today involving multiple people, efficient computers, and tight deadlines. Still TeX is among the oldest programs to still be running today (and into the future unless LuaTeX supplants it), delicately designed, intricately implemented, pretty portable and copiously documented.

All the programs in the TeX series (TeX by itself, but also METAFONT and all the auxiliaries) are written in WEB, but to ease the translation, D. E. Knuth has not really written in a flavour of Pascal, but in some very abstract Pascal; much an Algol: there is not a lot of Pascal idiosyncrazies left specifically to allow to convert the programs to whatever. The simplest, nowadays, is to convert the Pascal like code in raw C.

If you want to see the thing, just use kerTeX and with the get_mk_install.sh (or rc) program, when asked if you want the program to remove the intermediary products (including the *.c files in this case), just answer : NO to keep them.

For the bootstrapping problem (tangling tangle), D. E. Knuth has written that the first version was done by hand: he mimicked by hand what tangle would do (this is why such a program has to be basic, the same way a compiler has to be able to bootstrap a more basic version of itself to use itself to compile more complex one). This can also be done with text tools (I have sketched in kertex_M/bin1/tangle/tangleboot.sh such a program; it is not used, and lacks change file support).

The conversion from Pascal to C was needed because Pascal was not standardized, Pascal compilers not ubiquitous etc. And D.E. Knuth has also tried several years ago to encourage the possibility to compile TeX and al. with a Pascal compiler, just to be sure his programs will not be unavailable because of some compiling nightmare. And it was a pain.

It is more simple to convert to C, since it is, on purpose, a very basic Pascal (bibtex is far more hard to convert because it uses Pascal idiosyncrazies).

For information, the conversion from Web to C was web-to-c, initially from Tomas Rokicki. This is still what is used with TeXLive, or what has been used as a basis for kerTeX.

Talk is cheap. Show me the code. ~Linus Torvolds 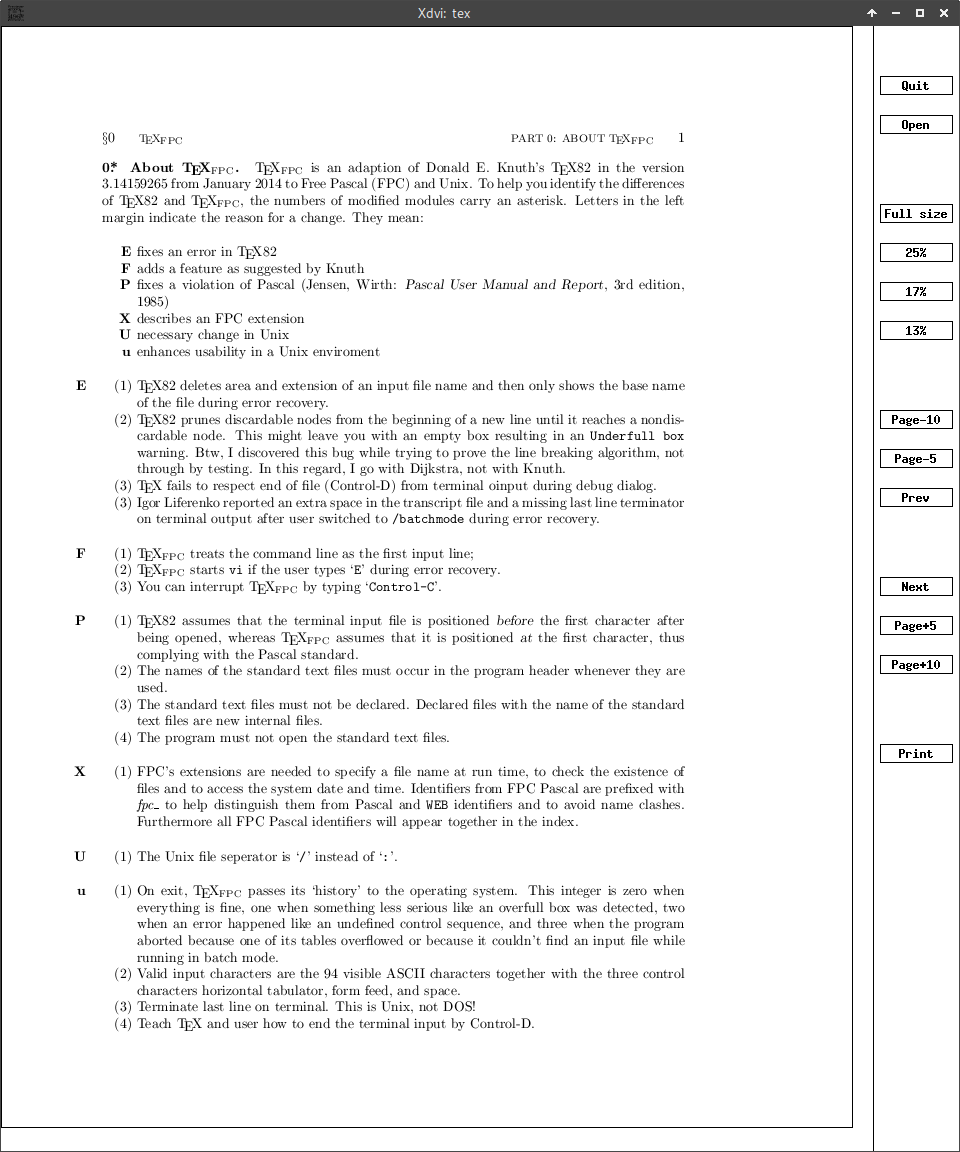 28
Where is source code of TeX, LuaTeX, pdfTeX
2
If LaTeX tools implement the TeX features from scratch

26
Can I see a plain TeX source file please?
62
What is the basic mechanism for writing something to an aux file?
6
Learning how to use TeX for automatic layout of non-technical documents
3
Does the concatenation of two text files, which compile under tex, always compile under tex?
2
What is the cross-referencing source code in plain.tex?
28
Where is source code of TeX, LuaTeX, pdfTeX
5
What are use-cases for active characters?