I have created a rather complicated table with some columns that I want to color. For the table, I chose the booktabs and tabularx packages. For coloring the columns, I use colortbl.

The problem that I have is that \midrules show a white space, and the result does not please me at all. Here is a MWE:

Looking around I found that booktabs supports colortbl in its latest version. However, it seems that it only supports colored horizontal lines.

I tried not using booktabs and replacing midrules for hlines. My huge table looks too crowded (once you booktab, you never go back, I guess).

My question is: is it possible to achieve a correct coloring in midrules ? Since I fear that the response is no: what low-cost recommendation do you have in order to color the columns of my table?

(When I say low-cost, I mean that I do not want to re-write my table contents)

There's no way to do this given the way booktabs inserts space between above and below its rules. As Herbert notes inthe comments, it's not clear that rules and colours are really a logical combination. So probably the best you can do is to increase the row height and set the space above and below the rules to 0.

The middle table still looks marginally better than the third one.

Rules and colour in a tabular is not necessary, as it is said in the note, but if you nevertheless insist using it, the package cals is able to handle both: 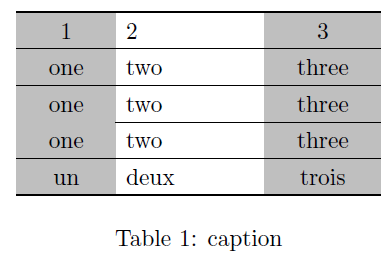 Not the answer you're looking for? Browse other questions tagged tables color booktabs or ask your own question.