In the preamble I have:

Problem is, that in the body, when having something like:

I tried to define a theoremstyle as follows:

This is better, but still not good enough. Setting the first argument to 40pt for instance does increases this vertical spacing, but I cannot make it go away.

How can I get rid of the empty line at the beginning of the box? I want to have the same spacing as the one at the bottom.

I guess I could tweak the solution provided here for example, but I want to try and use todonotes.

As egreg has said, todonotes is really the wrong tool for this job. You can get exactly the same result if you use the mdframed package, and the line spacing all just works out perfectly when you do. Here is a 'before' and 'after' comparison for you -- first using todonotes and second using mdframed. 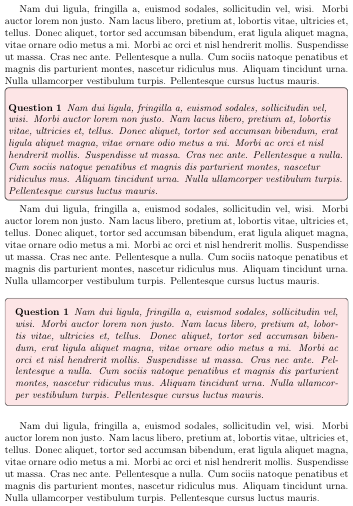 And here is the code for generating that.

Another solution using tcolorbox is given at this thread (answer nb 32): https://tex.stackexchange.com/a/204888

It worked for me, contrary to mdframed (because on some previous definitions in my file).

Not the answer you're looking for? Browse other questions tagged boxes highlighting amsthm todonotes or ask your own question.