With the following MWE:

I get this result: 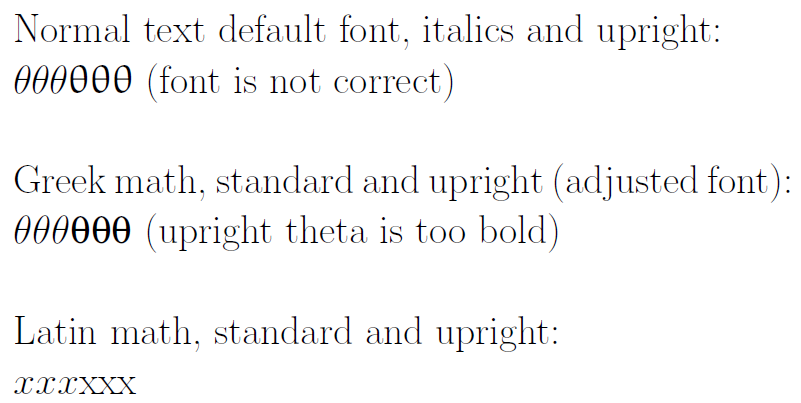 I don't know if it is typographically correct, but to me the upright theta seems too boldish compared with the italics of the standard math mode.

How can I get a correct upright theta?

I also tried to "artificially" enlighten theta using the method explained here, but was not able to adapt it to the right font.

The upright theta in these examples is not typographically correct.

Here's the problem. "Standard" Computer Modern does not "come" with upright greek letters, but with a slanted letter. The textgreek package provides a way around that problem, by using the cbgreek font, and defining \texttheta and so forth to "borrow" from them.

And that is fine ... but the cbgreek font uses the style of theta that looks like example (a) in the illustration below, not (b). These are not different letters, but variant forms of the theta (though unicode assigns separate numbers so that both can be present in a single font).

What then happens is that, in order to try to provide a non-script version of theta, textgreek is "borrowing" from either the Euler font (which is what is shown in your first example) or -- I think -- the symbol font (which occurs in your second, because you select Helvetica which textgreek "maps" to symbol).

Here are a few ideas:

Not the answer you're looking for? Browse other questions tagged fonts math-mode greek or ask your own question.