I am using thmtools as a front end to amsthm and I have a definition environment as follows.

And what I want is another environment, say called definitionAlt, which would be used to give an alternative definition of the one just given, i.e., it uses the same number/counter as the definition just given but adds an "a" (or "b" or whatever), without incrementing the counter, and cross-referencing would still work.

I have seen similar questions such as What’s the most straightforward way to typeset theorems etc. when the numbering is entirely manual?

which does some manual theorem numbering, but I cant find an answer that does exactly what I want.

Doe anyone have any suggestions?

Thanks to Marco Daniel for his help on this one!. 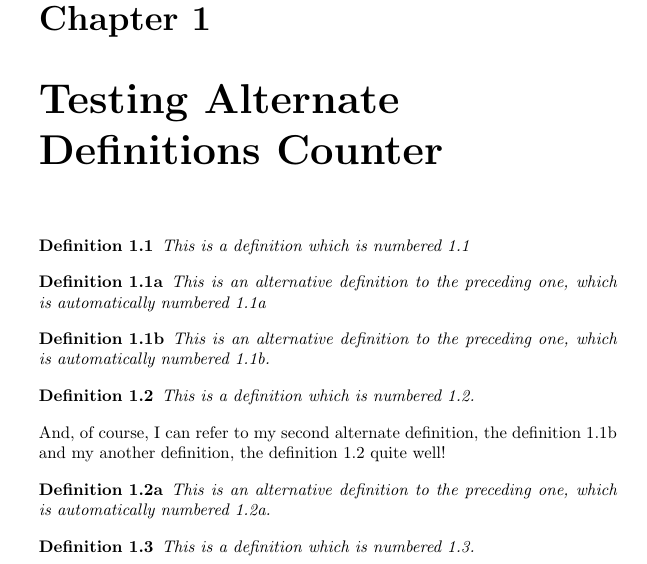 7
What’s the most straightforward way to typeset theorems etc. when the numbering is entirely manual?
4
Advanced hierarchical counting for theorems
6
Using amsthm to number examples - how do I account for altered examples (i.e. 1', 1'', etc.)

6
thmtools: theorem VI.2.1* = dual of theorem VI.2.1
1
Numbering theorems as subsubsections
11
Intelligently Numbering "remarks" only when multiple are made
2
numbering different theorem names with thmtools
3
Numbering of newtheorem
2
How to rename theorem when * is added
1
Amsthm with an independent couter prepended that only increases when the theorem is called in a new subsection
0
How to get hyperref to differentiate between similarly numbered theorems?