How can I format a verbatim paragraph? I.e. break, fill and join input lines to produce globally balanced output with the lengths of each line approaching the target \textwidth as closely as possible.

Using the listings package I can break lines, but I cannot join short lines.. That is, the following

What I would like to achieve is similar to what LaTeX does by default with paragraphs.. That is, e.g.

Now there seems to be a problem with lines becoming too short.. The following input

(I would now like to have the word "123" at the end of the first line, as there are certainly plenty of space for it there :))

The above problem has now been solved, see comments in Frank's answer below..

David did beat me by a couple of minutes, but this version here does indentation as requested and is not producing overfull lines (within reason):

As requested in a comment, the code above now supports \\ as a line break while single usage of \ will generate a backslash. The code gets a little messy in that case, but but that is kind of the price to change catcodes around :-)

Output would then be

Initially I had set \rightskip to 0pt plus 4em basically because I forgot that no hyphenation is going on in this type of environment. So with long "words" that could result in overfull lines. So I now changed it above to 0pt plus 1fil so as long as everything is shorter than a full line one should not get any overfull lines.

Of course line breaks only happen at spaces, so in the example given by the OP it will break after the first set of digits as the second already makes the line overfull.

As it turned out, the solution above would swallow one space after a ,in the input (in fact after a certain set of characters). That strange behavior is due to what I would claim is a documentation error in the TeXbook (page 44) namely that

is simply a more effective way achieve the same as

In fact it isn't. The latter definition will swallow an optional following space the former doesn't! And that generates the issue as the comma in verbatim is active to prevent ligatures and its definition is generated by the following code

which means that it expands to

and thus a following space is swallowed. So either one has to add an additional space into the definition of \do@noligs or one has to change \xobeysp to expand to something like

so that there is always something between the \char and the \space. The latter approach doesn't work for spaces generated by a line break in the source as this is by default translated into a straight space (which would be swallowed). So either one has change the behavior of ^^M (end of line) or one has to use the fix to \do@noligs.

Oh well :-) in normal paragraphs (and that was originally requested) spaces at line breaks vanish and this is what the current solution does. If this is not desired then one possibility is to change the definition of \@xobeysp in the code above.

Let's assume we have the following input:

The the current solution above results in

i.e., spaces at the natural and the forced line break vanish. Now if we instead use the following definition:

Which typesets the character in position 32 in the font (space) with a break allowed before and after, then we get the following output:

Alternatively we could use:

in which case a space will not vanish into the left margin and we get the same results only that spaces are now "blanks again".

With the OP further clarifying what he is looking for, a new requirement showed up:

So I updated the code above once more to include explicit handling of end of line processing. For this ^^M is made active (i.e., calls a command) rather than doing its standard magic. That command then is looking if it is followed by another ^^M. If not it will execute \@xobeysp (generating whatever is set up in the case for a normal space). On the other hand, if another newline character follows (i.e., if we have an empty line) it will generate a \par followed by \vskip\baselineskip to generate a vertical space equivalent to an empty line. It then continues to look for further newline characters to generate more vertical space if necessary.

There two boundary cases that need special handling which make the code even worse: after \begin{myverbatim} there is typically a newline character that should not trigger this behavior and just before \end{myverbatim} there is another one that shouldn't generate a space. The code above handles the first case well. The second is not working correctly if you do not have \end{myverbatim} on a line by itself, but there you go ... this answer is already much longer that it was ever intended to be :-)

If we again use the above example but add two blank lines in we now get the following: 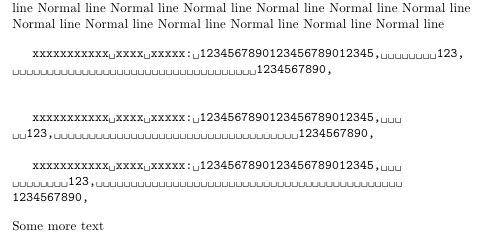 You just want the definition of verbatim without the \obeylines part:

Not the answer you're looking for? Browse other questions tagged formatting line-breaking environments paragraphs verbatim or ask your own question.