I want to draw diagrams that look a bit like this. Mathematically, you could describe them as directed acyclic graphs with dangling arcs. They're somewhat reminiscent of route diagrams. 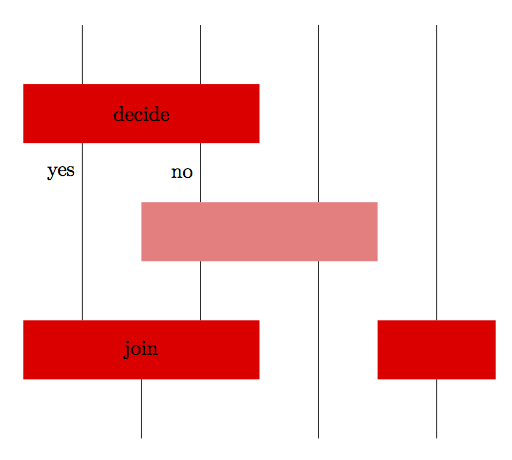 Source here. There are four lines dangling in at the top of diagram, then four nodes that operate on these lines, and finally three lines dangling out of the bottom of the diagram. I know how to create this particular diagram in TikZ, but I want to make a package for creating them in general.

It is important to me that:

This is the code I would like my user to type, in order to generate the picture above (I explain the code in the next subsection):

By 'row-by-row', I mean that if I removed the last few rows from this code, I would still obtain a perfectly valid picture, and it would look just like the one above but with the lower portion missing.

The user starts the diagram by specifying the horizontal placements of the initial lines. Each line is assigned a name, here a, b, c and d. While constructing the diagram, my package should maintain an implicit 'state', containing the names of the lines and their placements. At this point in the construction, the state is

Then the user creates a \step. The horizontal position is specified with the left and right keys. There is optional text on the step, which is 'decide' in this case. The incoming lines are removed from the state, and the outgoing lines are added to the state. At this point the state becomes:

The point of maintaining the state is so lines that are not involved in a particular step are drawn in without the user having to keep specifying them. For instance, the package should implicitly draw the lines c and d to the right-hand side of the 'decide' step.

Occasionally two or more steps occur in parallel, as seen at the bottom of the picture above. I propose to deal with this in the syntax by using \\ to explicitly start a new 'row' of steps.

My approach so far

My approach so far has been to try to store the state in a series of macros, e.g.:

and then maintain a comma-separated list of those lines which are currently in the state, e.g.:

My previous two questions (here and here), have resulted from my trying to get this approach to work. In those questions, I have condensed my code down to minimal working examples to show the particular technical problem I was facing. I thank the answerers for addressing those problems so thoroughly and considerately. However, since the same people are answering my questions each time, I suspect it is probably better if I just cut to the chase and show what I'm really working on. I have still idealised my problem a bit, to make it easier to explain, but I hope to have preserved most of the technical challenges.

I would like eventually to extend my diagrams to much more complicated ones than the example shown above. For instance:

Therefore, it is important to me that your solutions are robust and understandable enough so that I can fiddle with them a lot!

With the help of several sub-questions [1,2,3,4,5], I have managed to cobble together a reasonable solution.

The user input has been slightly modified: one now types \row at the start of each row, rather than \\ at the end.

Here is the output. The letters in grey are the internal names given to the lines, and are shown for debugging purposes. 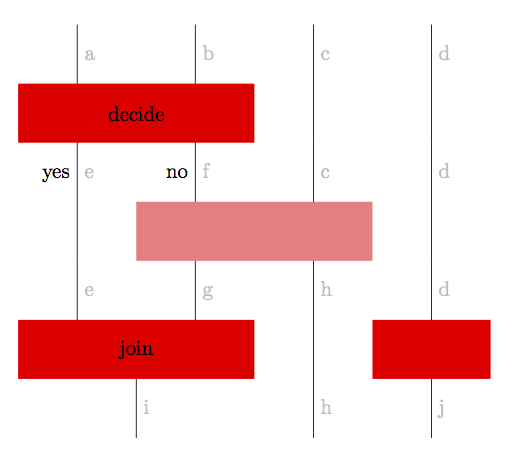 I would encourage anybody to improve this code if they would like. As such, I've made this answer community wiki.