This was brought to my attention by our colleague, Lover of Structure, but since it affects my scalerel package (which began using the mathstyle package to detect the current math style, as of version 1.4) it is now my problem too.

I even think I know why it happens, and I have a workaround, but I was hoping for a more satisfying solution. Here is the MWE:

and here is the result. 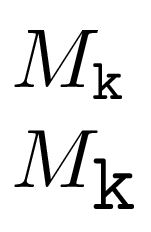 In it you see two different sized subscripts (call them small and large, respectively), which would not seem obvious from code. Investigating, I found that:

1) with neither package loaded, both subscripts are large

2) with only amsmath loaded, both subscripts are small

3) with only mathstyle loaded, both subscripts are large

4) with both packages loaded (as in my MWE), the first is small, the second is large

5) with both packages loaded, if the definition of \testcmd is moved after \begin{document}, both subscripts are small (this is what I call the WORKAROUND).

6) If I load mathstyle before amsmath, the code breaks, saying \dfrac is already defined.

"Aha," I say to myself. It would appear that one of these packages is using a "feature" I've seen mentioned wherein certain commands are loaded just prior to \begin{document}. But this would seem to put a significant constraint on users of these two packages (or users of amsmath and scalerel); namely, one would be forbidden from defining math command shortcuts in their document preamble.

So, my questions are these: am I understanding the nature of the problem properly? Is there a fix that would still allow users to define math shortcuts in their preamble, while using the package combination?

If you need definitions in the preamble you could just execute that earlier.

Not the answer you're looking for? Browse other questions tagged math-mode packages amsmath incompatibility subscripts or ask your own question.

18
Sorting preamble packages thematically while accounting for compulsory load orders
12
Does the intlimits option work in amsmath package?
7
Conflict: kluwer and amsmath
8
array package incompatible with stabular package
24
What causes this strange interaction between glossaries and amsmath?
14
Shortcuts and/or user-defined shortcuts for math symbols in LaTeX?
27
Best practice for fixing a clash between packages without altering the .sty files?
25
Using KOMA-Script packages with other classes
0
moreverb conflict with spverbatim, texlive 2016
1
Alternative to \SwapAboveDisplaySkip for AMSmath equation environment?