How are big operators defined?

I would like to create a new "big operator", by which I mean something like the Σ character used for summations.

I know about the \DeclareMathOperator* command, which creates an operator whose superscripts and subscripts are written directly above and below the operator. Here is an example of that.

However, I would like to make my operator "big". I tried this:

but that feels like a bit of a hack. Besides, the operator is too high, and needs moving down a tad to align it properly with its operand. So, what's the proper way to do this? How, for instance, is the \sum operator defined?

The scalerel package allows you to scale a symbol to the size (and vertical positioning) of another symbol. So in this case, I define \foo to scale \maltese to the size of \sum. Thus, it piggybacks its sizing off the well defined behavior of \sum.

It wasn't clear to me if the questioner wanted to keep the maltese cross the same size in all operations. However, if that is the case, I can redefine the \foo operator as \barr in order to keep the size equal to that of a textstyle summation sign. The example below shows instances of \foo as well as \barr in both displaystyle and inline.

Edit: Use scalerel version 1.5 or later to ensure that scalerel captures the current math style. 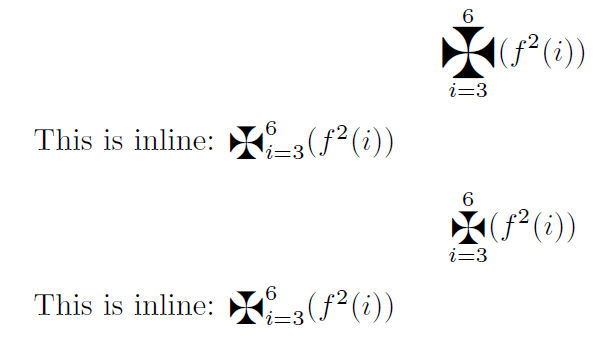 Operators such as \sum are not defined with \DeclareMathOperator that should be used (with or without a *) for “textual” operators.

The definition of \sum is

The macro \DeclareMathOperator uses \mathop, which has a strange property: if its argument turns out to be a single character, it will be raised or lowered so that it becomes centered with respect to the math axis (where fraction lines are typeset).

Since there is no “big version“ of \maltese, one has to resort to other methods for building a good symbol from it. Indeed, one of the math font properties is that some characters have instructions telling where to find “big versions” for it.

TeX has a workaround, which is called \mathchoice; so you can do it with something like:

We define for each style what we want. The \dobigmaltese command builds a box centered with respect to the formula axis. I've added some room above and below. This won't change sizes when the overall font size changes; a slightly different method would be necessary.

which tells you (or at least, tells TeX) that there is a larger version of the character at position octal 130.