I'm new to TikZ, and I'm trying to solve a problem which should be easy, I found many related examples but none helped me.

Given the following MWE:

The preferred anchors positions, text width, image size and font are all fixed.

In the example, B should be moved up a bit, to make room for C.

The issue is that I want to automate this over several images, with different sets of text blocks, and I do not know in advance whether/where the three-line blocks will be (however I can make sure I do not have neighboring three-line blocks).

Note that if all blocks had three lines I would get out of the margins, so I cannot simply set a minimum height for all blocks. However I'm sure I have 6 blocks per image, only 1 or 2 are long, and they're not adjacent.

Feel free to guess what I'm trying to do :)

tikz-pgf spacing vertical-alignment
Share
Improve this question
asked May 31 '13 at 20:40

If I understand correctly the problem, you need to have the + symbols evenly spaced, and the text "as near as possible" to each +, but avoiding the paragraphs being too close. So you allow for small shifts of particular paragraphs, leaving the others untouched.

So, an acceptable output would be: 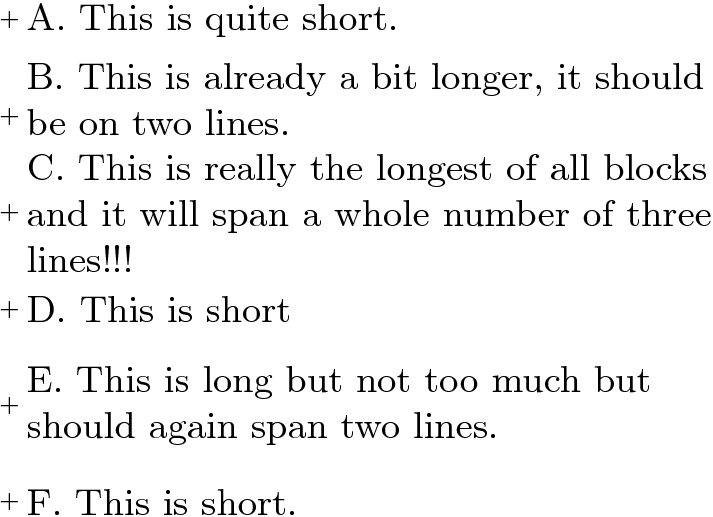 I'll draw a box around each paragraph to clarify. As you see, the paragraph B was shifted and the + is not longer vertically centered in this paragraph. But distance among + is constant. 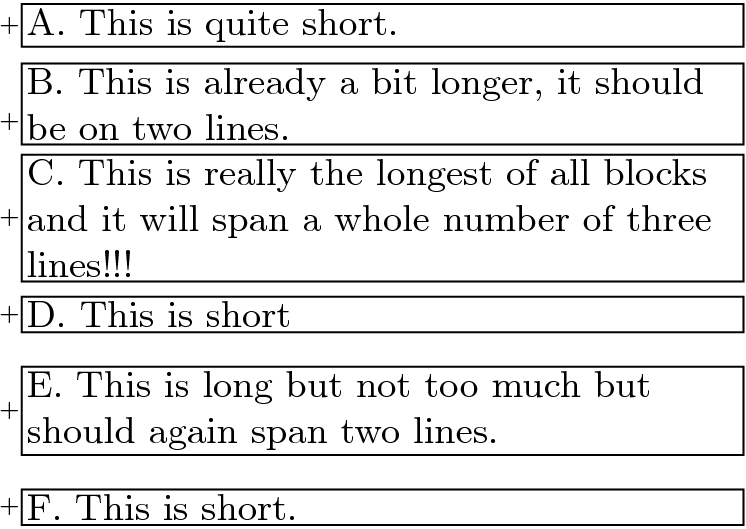 How it was done

As you guessed, this required two passes. In the first pass all paragraphs are drawn as rectangluar nodes, vertically centered with its corresponding + symbol, but they were typeset with white ink, so they are not visible.

In the second pass, the distance between each node and the next one is measured. If the distance is below 1mm, the node is raised 1.5mm. I've found this heuristic to produce good results.

In order to simplify the coding of the figure, all the texts are saved in a list, which is reused in each pass.

In the next figure, I've drawn in pink the nodes in the first pass, so you can see the original position of the nodes and how much they were shifted. 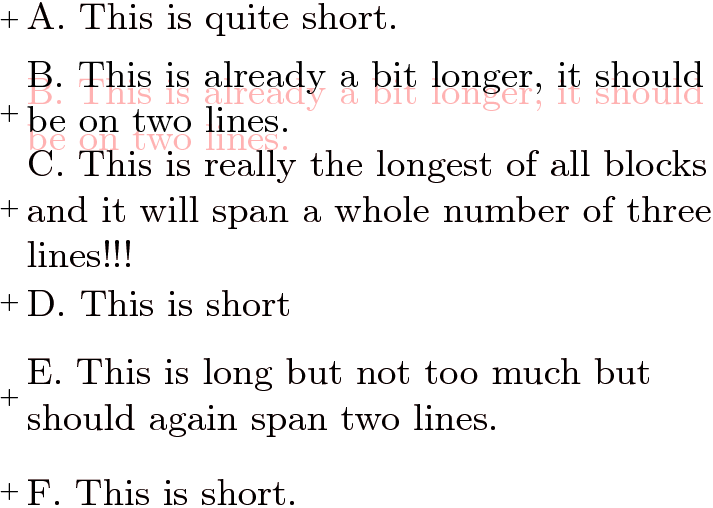 You can still use the positioning library if you are overlaying these nodes. Basic mechanism is the fix the first node somewhere and place the rest of the nodes using the

option. I don't know what the underlying figure looks like but here is a general template.

You can see that we can omit the dimension in the below=... syntax and then it will assume the distance given by the node distance option. 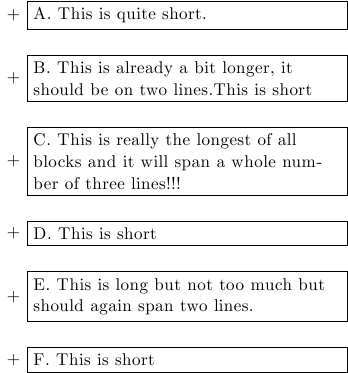 Not the answer you're looking for? Browse other questions tagged tikz-pgf spacing vertical-alignment or ask your own question.

19
How to define the default vertical distance between nodes?
9
Why does my arrow head size decrease?
4
Using tikz Calc package to add cordinates
2
Vertical alignment of the last column in tabular, math mode
3
Tikz node without text
0
TikZ - vary node positioning depending on shape size / anchors
8
How can I draw angled lines in LaTeX to create ruled template for calligraphy?
1
Aligning three plots of axes and text using tikz
4
Tikz, absolute image position, and text wrapping
2
Document header with tikz