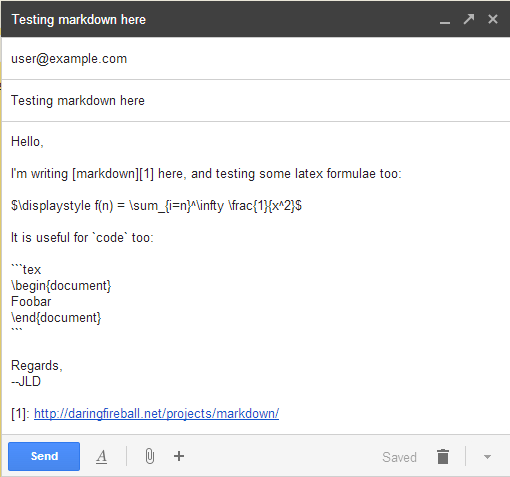 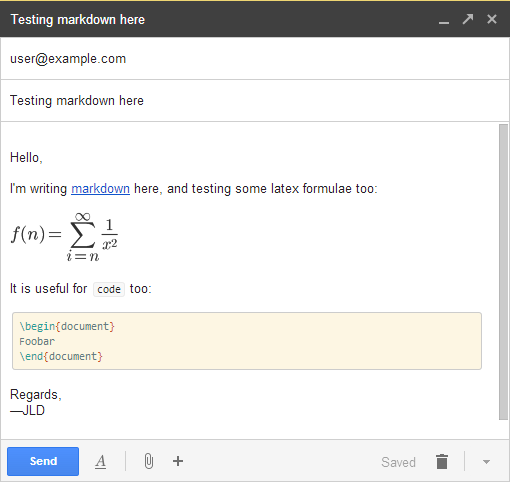 Here is an obvious but super useful point, at least for me:

To insert LaTeX into an email composed in Outlook or some other mail client, first compose the message in Gmail using Alexeev's TeX for Gmail, then copy and paste it into your mail client's compose window! Of course, all mail client must be composing in HTML.

Write LaTex in above textarea. Select svg in below and select font size as your wish. Now copy the image (svg) only now paste it in your Gmail.

I have just noticed that Thunderbird, without add-ons, now allows inserting Mathematics as LaTex code and will display it using MathML. In other mail clients you can more or less read the original LaTeX.

The Google Charts API service (https://developers.google.com/chart) includes typesetting LaTeX math snippets as images, which can then be included as an inline image in the email with Insert Photo -- Web Address (URL). For example,

Not the answer you're looking for? Browse other questions tagged online big-list email or ask your own question.

3
Datatool can't evaluate email as empty?
2
Email inside \author{} not producing clickable email with \maketitle
3
Custom email macro
2
How to add an email address with an underscore in the elsarticle.cls LaTeX template?
0
adding email under author affiliation
0
Multiple Author and email with location?
0
Modifying superscript color in authors \email
1
Breaking line in \email command
0
Write email address with an underline between words