I'm trying to produce a command sequence \m that

For example, the code

should expand to be equivalent to the following:

After spending more time on this than I should have, I came up with the following partial solution to the problem using xstring:

This is close to what I was hoping for, but I haven't come up with a way to use \foo as a helper function for \m to get exactly what I want. I was thinking that defining \m in the preamble by

would work, but then even calling something as simple as \m{a} in math mode will produce errors. It looks as though math mode attempts to parse the definition of \m instead of letting \m fully expand, but my understanding of how this works is too limited to know how to fix my code.

Is there a way to modify the definitions of \m and \foo to make them do what I want? Can I somehow escape math mode in the definition of \m to avoid these errors?

Here is a method the old-fashioned way, using macros with delimited parameters. 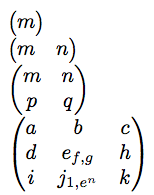 Here's an implementation with expl3 functions:

It's quite straightforward: we first split the argument at semicolons; then each item is split at commas and, row by row, the contents of the matrix is built. Finally the contents is inserted between \begin{pmatrix} and \end{pmatrix} for printing. 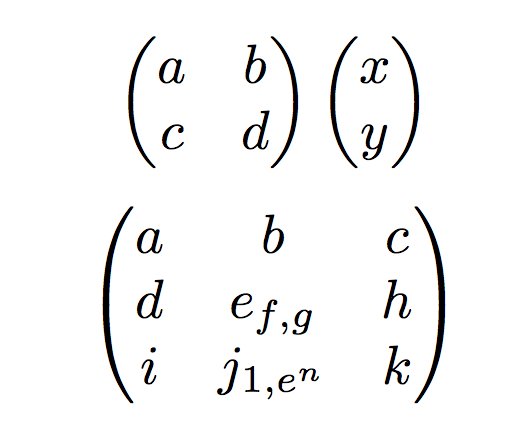 This code should do what you want:

You don't have to do string replacement you can just define , and ; to do the right thing in pmatrix

Apparently, pmatrix survives an additional \\ after the last line without adding an extra line (unlike the usual math environments). The additional & though has to be removed, this is done by \@gobblesecondoftwo.

I have also included a solution that does use TeX’s delimited parameter to split the argument at ;s and ,s.

10
Same height for list of comma-separated vectors
7
Math mode accents and spacing
22
How to create a list of symbols where symbols can be used in math mode?
5
Using mathspec to change digits font in math mode isn't working
5
Conditional whitespace in math mode
4
How to use fonts (the ones listed in mathalfa documentation) in math mode
7
\numexpr behavior in math mode and/or TikZ
6
Confusion about unicode-math symbols w.r.t. math/text mode and format