For a while now I've been thinking about an array/tabular feature that would be quite nice to have. It doesn't seem to exist yet, as far as I can discover. And unfortunately, I can't spare the time right now to develop it myself.

If it does exist, please let me know. Otherwise, perhaps someone may be inspired to work on it. If you are so inspired, I'll give you a 300-500 point bounty when you've coded a working solution. Look below.

It involves a new way to indicate content alignment. Rather than using & to jump to the next column, all column separators are assigned a number (or name), and you have to refer to one specifically to align to it, for example with &1, &2, ... And \\ always aligns to the right border of the table.

The upshot of all this is that it gives us a very simple syntax for \multicolumn like behavior.

would be short for

It brings a bit of what tabbing does back to our nice modern tabular and array environments. tabbing itself is too simple to be useful in most situations.

Myself, I would use it more for arrays. Being a bit of a perfectionist I've taken to aligning even the smallest bits of my formulas, then using \multicolumn in all formulas that should just pass through that alignment. This contributes positively to the readability of the final document... but not that of the source-code. This feature would help immensely.

As an extra incentive I offer a bounty between 300 and 500 reputation points to the person who writes the package described above. The exact value of the bounty depends on the quality of the package.

I'm not 'officially' placing the bounty on the site yet, because I don't want to impose a one-week deadline. I will place and award the bounty when I've seen and tried the solution.

May the mods strike me down if I don't.

Nice job there! And quick. But there's still some bugs.

And (3) the following real-life example doesn't compile at all:

I see you fixed point 2 and 3 from above. Looking good! I can't find a way to break it anymore (right now).

But I'd appreciate it if you could still fix nr. 1. This is the last reason left why I can't use it yet for my real-life documents. (After that there remain only 'would-be-nice' additions.) It needs to handle column separators better. Right now, it uses the column separator from the first column of the preceding cell, whereas it should be using the one from the last column of the preceding cell. Example:

(This bug is not visible in your array example because of a misconception of mine. I imagined that a \< would be implied at the end of the last row. But I don't think this is something that should be fixed. The current behavior is fine.)

Anyway, I'll give you the bounty right now (though I imagine you're not doing this for the 'points'). Still, a fix for that last problem would be great.

Edit: Hehe. Seems you'll have to wait for tomorrow. Silly website. Offering "reward an existing answer" as a valid reason for a bounty, then enforcing a 24 hour waiting period. 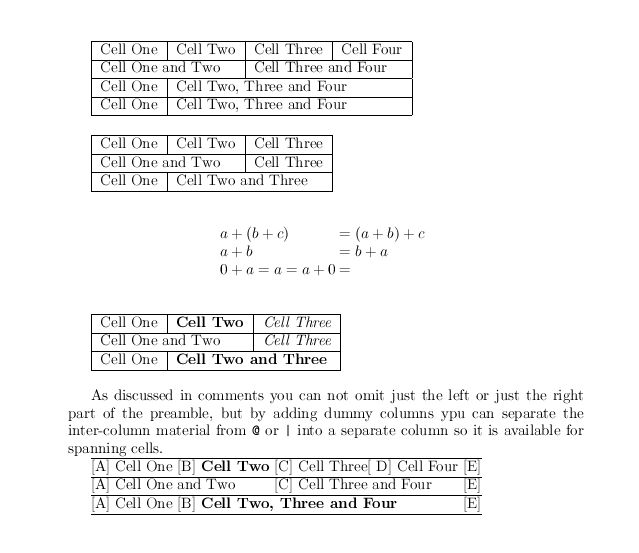 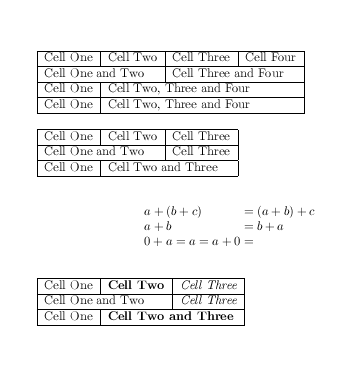 I added some array package formatting so that you (and I:-) can tell which cell is picking up which column spec. As written it probably requires array package.

If you don't mind a slightly different syntax and using luatex, you can use Lua tables:

and delegate the typesetting to lua. For example, here is a ConTeXt implementation (it should be easy to translate it to LaTeX):

Not the answer you're looking for? Browse other questions tagged tables horizontal-alignment arrays tabbing or ask your own question.