I understand that one should (?) be using UNICODE for html. But using this with tex4ht, always makes "ff" look strange. Why does this happen for "ff"? and based on this test below, should one instead use iso-8859-1 encoding when using htlatex to generate HTML from Latex, or may be I am not using the correct combination of options?

Given this latex file

Here are 5 different htlatex commands: 3 used utf8, one does not use any encoding (default), and finally one uses iso-8859-1. The iso option generated the best result. This is on windows using firefox.

Result using provided test below is shown in this image. It shows a problem. 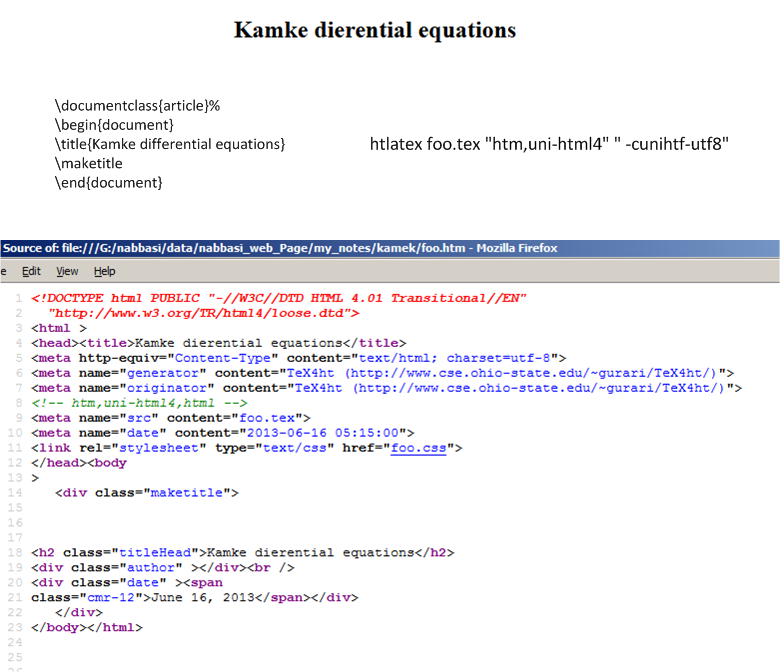 As to the “why” question, what is happening here is that under some circumstances the letter pair “ff” is replaced by “ﬀ” LATIN SMALL LIGATURE FF U+FB00, which is understandable in a sense, but then things go wrong.

In cases 3 and 4, the character is presumably written correctly in the HTML document, but the font being used does not contain it, so the browser picks up a glyph from a backup font. The probably depends on font settings, which were not disclosed in the question.

In case 2, the character is written as UTF-8 encoded, bytes 0xEF 0xAC 0x80, but then these bytes get interpreted according to windows-1252, yielding “ï¬€”. The reason is that the character encoding has been declared incorrectly, or maybe not at all, forcing browsers to guess, and they may guess wrong.

Using U+FB00 is understandable but questionable. Such characters used to be the only way to use ligatures in HTML document, but they only work when the font used contains them. Nowadays you can use font-feature-settings in CSS, and although they are still relatively poorly supported (in fonts and in browsers), they are safe in the sense that when they fail, e.g. “ff” gets displayed just as “ff”, not in a fancy incorrect way.

Not the answer you're looking for? Browse other questions tagged unicode tex4ht input-encodings ligatures iso or ask your own question.

181
LaTeX vs Word; improvements of LaTeX over the years

21
How can I tell LaTeX that an \input file is in a different encoding from inputenc?
4
How to get UTF-8 output with tex4ht under MikTeX 2.9? (`Illegal storage address` error)
3
How to get Unicode characters into HTML output
2
different result from tex4ht vs. pdf when using macro call
2
Svg output for Mathematics using htlatex or tex4ht
2
Use utf-8 encoding instead of iso-8859-1
3
Is it possible to add an entry to the HEAD section of the HTML from inside the latex file with tex4ht?
1
frame option from adjustbox does not work in tex4ht