A correct bounding box for a standalone logo

produces an incorrect bounding box for italics (note that the '2' is clipped):

How can one generate a correct standaline image? Simply modifying \linewidth to a fixed dimension does not work.

(As discussed here, inserting varwidth is necessary to avoid that standalone would merge the two lines on one line.)

The problem that the character glyphs are outside their official font bounding boxes cannot be solved inside TeX, because TeX does only knows the official character bounding boxes and not their visual appearances.

Part of f is not visible and \not has vanished entirely (extreme example, because \not has width zero, it overlaps the following relational operator).

As workaround a larger margin can be added:

And the result is cropped, e.g. via pdfcrop:

Compare the syntax along the lines of Will two-letter font style commands (\bf , \it , …) ever be resurrected in LaTeX? 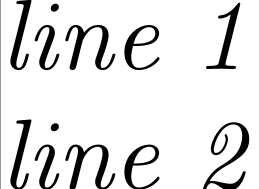 Would \/ at the end be a good solution for you?

Change your MWE to

Otherwise, use \textit instead of \em so to add automatically italic correction

Not the answer you're looking for? Browse other questions tagged standalone or ask your own question.