How to set a new clean arara rule that circumvents Dropbox interference in Windows?

arara is a cool tool for LaTeX automation, it works by setting your directives (i.e., a code line in tex document) to tell arara what to run next in a specific order that best suits your LaTeX compilation needs. These directives should contain rules (i.e., configuration files that are written in YAML language, default rules ship already with the package but you can create your own) One of the default written rules, called clean, which I found useful to get rid of the auxillary as well as other files which are normally generated during the process of PDF compilation.

The problem arises, when one is working inside a Dropbox folder (a reasonable way to keep your files in the cloud synchronized, updated, and shared), as arara is trying to delete these auxiliary, etc.. files by the clean rule, Dropbox is trying to synchronize them, and synchronization will take some time depending on the size of your files, here comes the problem, arara clean rule will fail, reporting that files are used by another program.
One workaround is to add a sleep command before the delete command in the clean rule file. The below code was generously given from Paulo Cereda, one of the authors of arara fantastic package:

The above code should replace the default clean.yaml file in the arara rules directory, or a better approach, thankfully suggested by Marco Daniel, one of the authors of arara package, is to provide a new path in araraconfig.yaml for the new rule. Directives in tex file should look like this:

Question:
What command should replace the COMMAND HERE in 6th line of the YAML file above that works in Windows 7 platform?

I tried the following but didn't work:

I think the best way to deal with this issue, as rightly suggested by jon, is to pause the snycing of Dropbox if I am intending to implement the clean rule of arara, better than writing a new rule on ad hoc basis. So in Windows, simply go to the dropbox icon on the taskbar and select pause syncing as shown in the picture below: 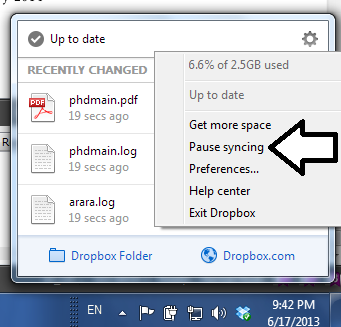 After that, you can run arara default clean rule, the clean directive should look like this:

, but now without the interference of the Dropbox. You will have a clean feeling that all of the ancillary files (e.g., 17 files) are deleted by names specified in the rule in one go, you cannot delete files by mistake, that's what makes arara-automated-delete elegant!
Note:
DO NOT forget to resume syncing files of the Dropbox.

Not the answer you're looking for? Browse other questions tagged rules windows arara dropbox or ask your own question.

1
Control the output of TexMaker

14
How do I specify two default options for an arara identifier?
28
Is Arara safe/secure
10
Is it possible to write an arara rule that invokes another arara rule?
4
arara with indent.yaml works in command line but not in TeXmaker
3
Using arara directives to automate lilypond-book and pdflatex
4
Help to create arara yaml file for asymptote automated compilation
5
Convince Arara to compile .tikz files
2
Automatic indentation done for subfiles with arara and latexindent not working
1
Automatically Typeset two Versions of a Document - Update needed for Arara 5.0