Spacing depending on optional subscripts and superscripts

I am totally new to LaTeX (use it for 2 days), so I am sorry if this has already been asked, but I spent the last 6 hours searching for a solution, but to no avail. (I stumbled upon a package xpeek which might be able to do what I want (or maybe not), but the documentation was way to complex for me to get anything out of it.)

I am using the ansmath package to write some formulas. I want to introduce a new command for formating my matrix variables. My first attempt was:

I tried a bit with

but was not able to detect if there is also a superscript present - or at all how to read past the first character after the macro. I guess, this should somehow be possible with \@car and \@cdr, but I have no real clue on how to use them.

Any help is appreciated. Thank you for your time.

Ok, finally I found a solution. I stumbled upon a version of \@ifnextchar which removes the character in case of a match here. I have no clue how it works, but it works.

By using it to remove the _ and ^ characters, I was able to call some other macros turning A_{B} into something like \@mtrx@sub{A}{B}.

Just in case, someone is searching for a similar problem, here is my solution.

Maybe this is not the best solution, but I am really glad that I finally found it. Anyway, in order to learn from this, please feel free to comment and/or improve.

\boldsymbol internally boxes the character and sets it in a new math list. This prevents the font-specified subscript correction being applied. If instead you use the alternative mechanism in the bm package the P is set as a bold letter in the current math list and then TeX will correct the subscript position by an amount set in the font parameters for the font being used: 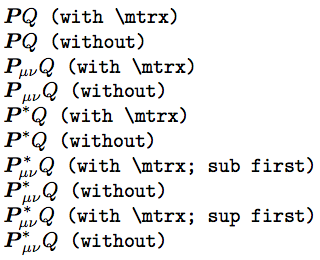 Not the answer you're looking for? Browse other questions tagged spacing macros subscripts superscripts token-lists or ask your own question.