Are there any professional alternatives to TeX/LaTeX which produce equal or even better typesetting? Maybe expensive commercial ones. The software counts if it is comparable or superior to LaTeX (with microtype) in typesetting text or math (or both). In any case, please mention both aspects in your answer.

I am only aware of ConTeXt (which is partly based on TeX).

Note that I am not looking for an alternative for my personal use, I am just asking out of curiosity.

You asked for professional solutions. Several top technical journals, including I believe Physical Review Letters and Nature magazine, use Advanced Print Publisher (APP), also known as Advent 3B2. Formerly available from Arbortext but now from PTC.

It can definitely handle mathematics, and I'm sure it deals with typographic details such as ligatures and microtype-like tweaks. I believe the main strength over tex is that it makes complete document production very automated. Things like dealing with floats (tables and figures) in a more-automatic way than tex, and giving manual controls to override it.

I truly believe nothing comes close to TeX (and Friends, e.g. LaTeX, ConTeXt) when it comes to output quality.

Other DTP programs such as Indesign (Adobe), QuarkXPress (Quark) or Scribus (open source) offer a graphical interface and hence an easier learning curve, but they don't match up in terms of quality. Amongst many, let me just point the two most obvious quality advantages of TeX:

Typesetting maths correctly is very complex (symbols need to adjust in size, spaces are very specific, etc.), and only TeX gets it right. There are probably even better examples, but try obtaining something like the following in InDesign: 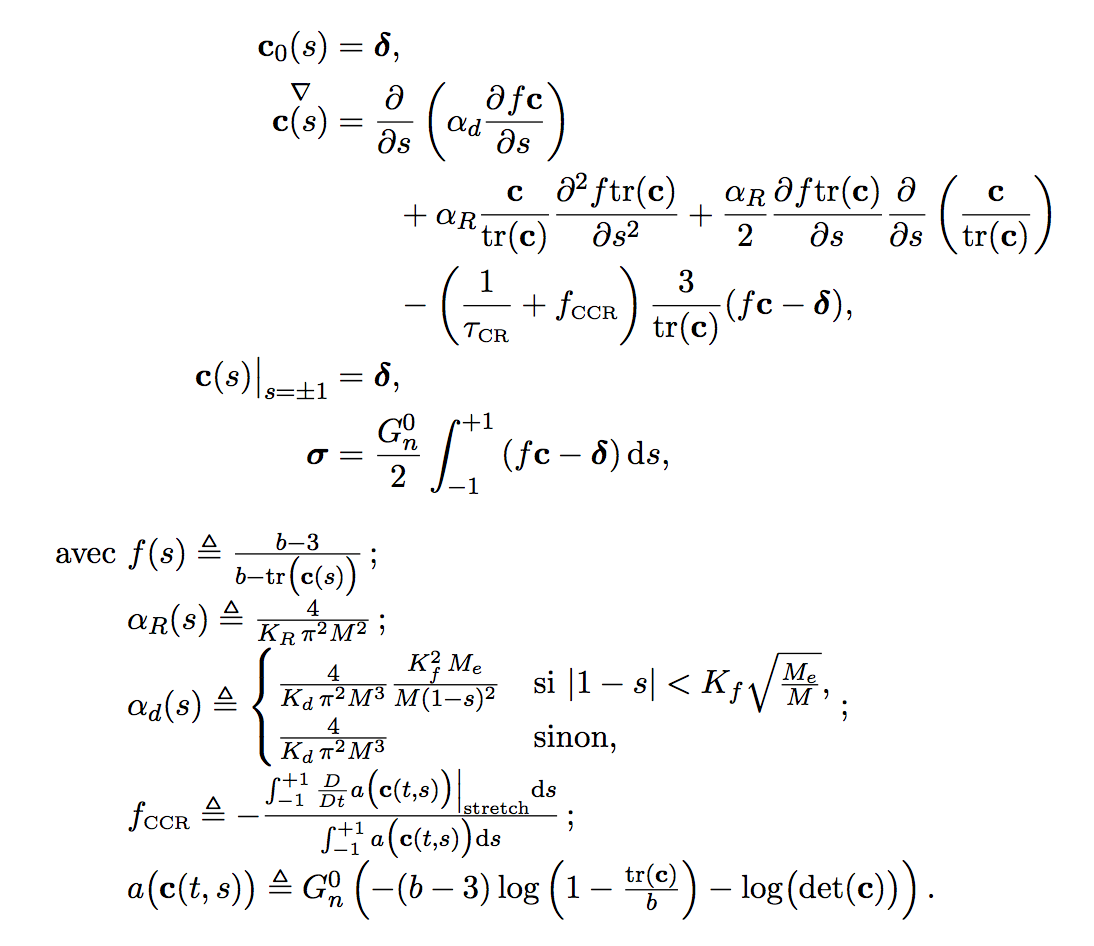 Tex's algorithm is very complex and takes into account possible hyphens, widows, orphans, etc. to produce an output that is more elegant.

The best showcase of this I have found is a comparison posted by Roel Zinkstok of Zink Typography, reproduced below. On the comparison, Roel indicated with red dots lines with inter-word spacing that is out of proportion, a cardinal sin for typography, while the red circles indicate hyphens, which should be minimized: 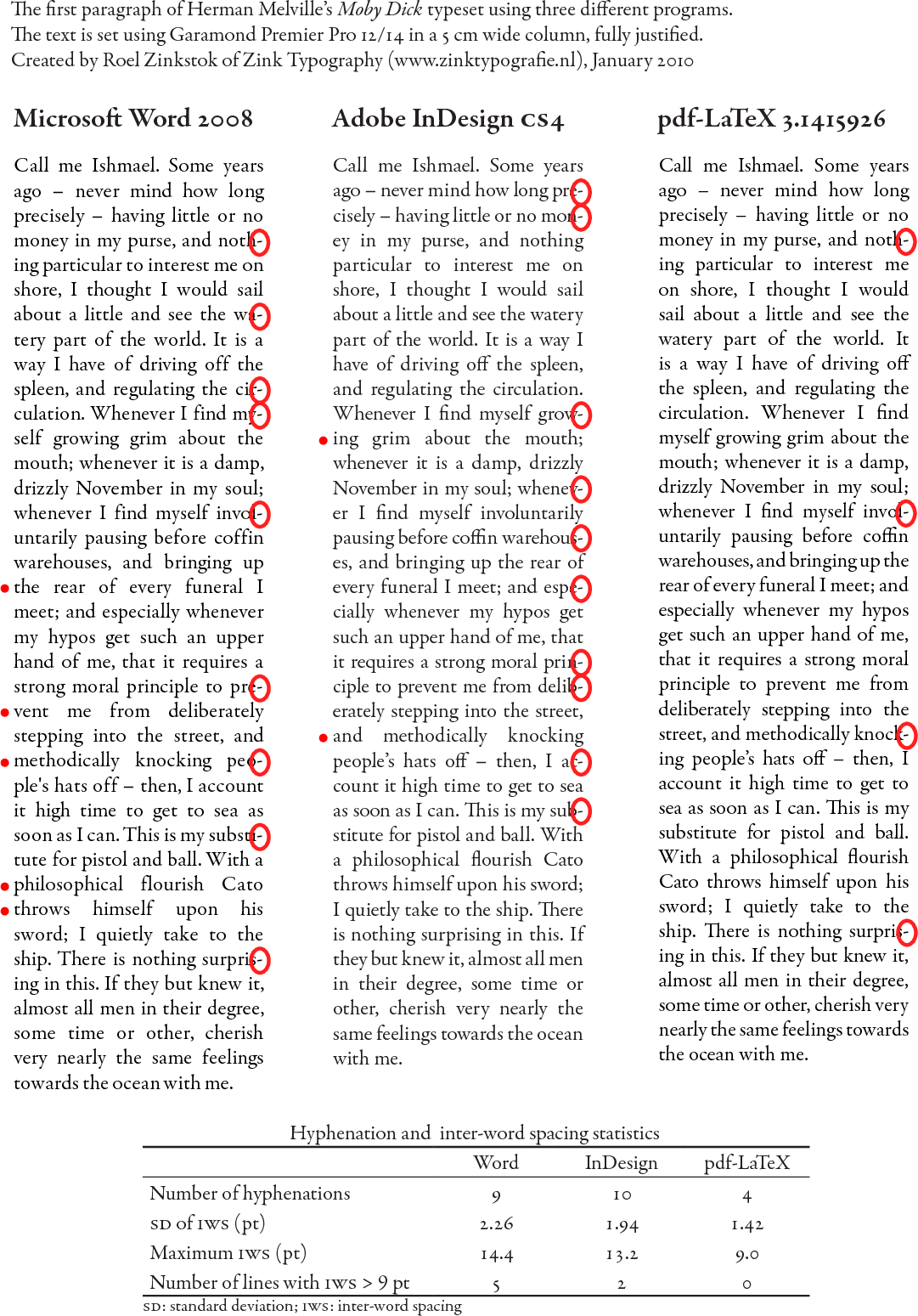 A shameless plug: We are offering a professional typesetter (though open source) which is based on LuaTeX. If it is "equal or even better" than LaTeX is surely subjective.

Our focus is to bring the DTP world to automatic typesetting (database publishing). For example we have

While TeX / LaTeX is focused on text documents (with or without math) our main application area is product catalogs, price lists and other documents that are created automatically from databases but have flexible and nice layouts.

I'd like to invite everyone to try out or perhaps work on the software. Development never ends (as usual).

Troff should definitely be mentioned for its simplicity. I normally use LaTeX for all my documents, but for some special cases (e.g. user manuals) troff (or its GNU version groff) is just the simpler way. It can also handle math using the preprocessing tool eqn. A nice comparison between troff and LaTeX can be found here.

GNU TeXMacs is a WYSIWYG scientific structured document editor and typesetter. It used to require a TeX distribution but now it does not.

Here is a list of not so widely known typesetting systems that I found googling around, mostly work-in-progress (or work-used-to-be-in-progress):

Here's a bit of commentary I wrote up a couple of years ago, which still applies. It's also on the ConTeXt wiki.

Using a typesetting tool isn't like being a prisoner selecting a tool to dig their way out, it's more akin to being a galley slave....

A new alternative is Patoline, which is still in an early development stage but the goal is to be a modern digital typesetting system.

Obviously, a related (but much smaller) project is the Patoline compiler, which compiles a mixed Wiki/LaTeX/Ocaml syntax into a variety of output formats, including traditional PDF files, but also web servers that deliver dynamic contents, synchronized for instance with a talk.

The documentation includes a PhD thesis and a description of the syntax which was produced using Patoline, and which looks to me as an amateur in typesetting pretty good: 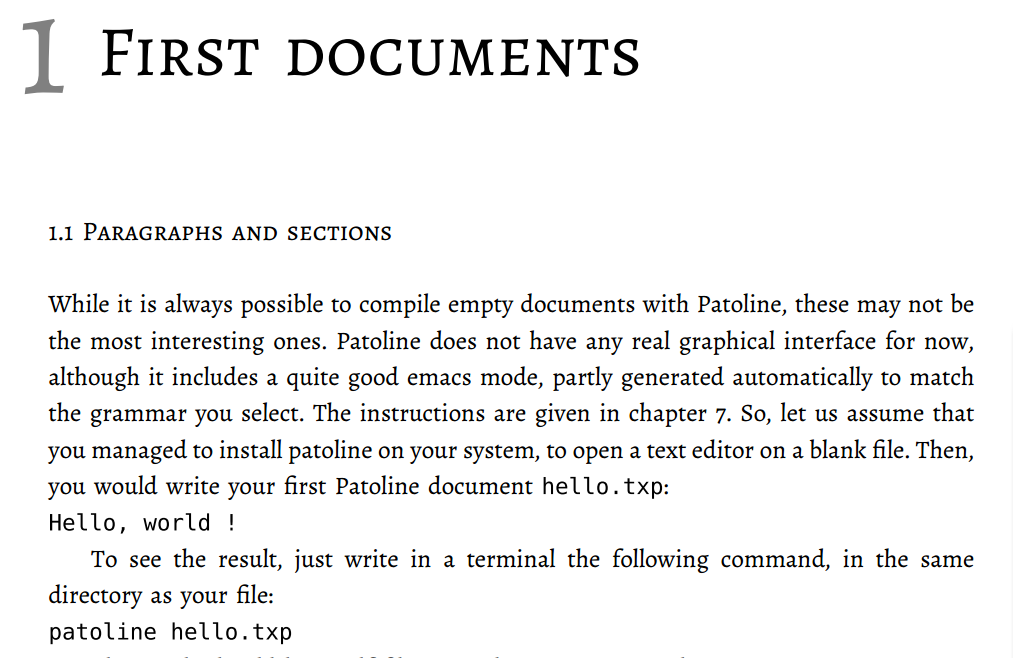 While LaTeX is the markup language of choice in many scientific and scholarly circles (especially in the fields of mathematics, computer science, physics, and astronomy), some scholars are starting to write papers using new markup languages tailored for the web. Markdown is one of them. It is very versatile and it can be easily extended to satisfy the needs of scientific writing. The advantage of using Markdown (or similar) instead of LaTeX is that we are writing on the web more than ever. Thus, it makes sense to use a web native typesetting format. For those who would like to use both Markdown and Latex on the web, Authorea (full disclosure, I am a co-founder) is an online social authoring platform that allows articles to be edited in both formats simultaneously. Authorea also renders and compiles LaTeX and MathML equations to the web, in addition to PDF.

TeX and friends maybe still the best. There are some alternative and results are various. I do not really use any of them, but kind of know there existence.

As long as you don't need mathematical typesetting, you actually can find better than TeX with Heirloom Documentation Tools. Not only does it provide Knuth's algorithm for formatting paragraphs; it also allows to compute spacing by mixing three systems (interletters spacing, interwords spacing, imperceptible change in the shapes of the glyphs). Thus you can work with constant space between words! Selecting a font among various kinds of fonts is much easier and quicker than with TeX. I have been using it for years while my colleagues use LaTeX; they wouldn't have the idea to only think their documents can be on a par with mine. If you are interested in typography, then Heirloom version of troff is definitely the way to do.

edit: Since I first wrote this answer, it looks like new pieces of software have appeared. I just heard about utroff which seems to come from Heirloom troff; I will very certainly have a look at it and probably use it now because Heirloom troff doesn't seem to be actively maintained and may be difficult to compile.

(copied from the project webpage http://www.tustep.uni-tuebingen.de/tustep_eng.html). The pdf manual seems to by typeset with TUSTEP and Ghostscript.

The software seems to be operational since 1971 if I understood an ai translation of http://www.itug.de/index.php?id=58 correctly. The most recent version apparently was published in 2022.

I have never used the software and I do not personally know anybody who uses it.

I recently found this page: https://www.texfaq.org/FAQ-alternatives

Patoline is a typesetting system written in OCaml and using a mix of TeX-like syntax and “escape” to OCaml to provide typesetting control. Patoline aims for a module design, and fast numerical processing.

SILE is a typesetting system written in Lua and using the HarfBuzz font shaper. It’s input syntax is somewhat inspired by LaTeX, for example

is a valid SILE document (notice the lack of a preamble here).

Speedata Publisher is like SILE written in Lua, but uses LuaTeX (not pure Lua) to provide the “back-end”. This means it does feature a tiny TeX-based wrapper, but once that has handed over to Lua, TeX is not involved. Speedata Publisher is particularly well-suited to some areas in which TeX is less successful, for example more image-rich documents. -Lout

Lout is a batch document formatter invented by Jeffrey H. Kingston. It reads a high-level description of a document similar in style to LaTeX Lout copies some of its formatting algorithms from TeX but uses a high-level functional programming language, instead of a macro language as its customisation language. Lout has never had the user base of LaTeX, but is still maintained and was released around the same time as LaTeX2e in the early 1990’s.

groff The *roff family of typesetters pre-date TeX and influenced its design. They have always been distributed as part of Unix and Unix-like systems such as linux. Most notably man pages are typeset with this system.

Pollen, written in Racket (of the Lisp family). The primary focus is web-based typography (and no math so far), but it can also support other formats such as pdf.

R Markdown runs on the TeX distribution when using kntr to create PDFs. But, to type in it requires less code memorization since R produces default YAML headers when you load up a new document.

Scientific Word can be another alternative software for scientists: http://www.mackichan.com/index.html?products/sw.html~mainFrame

The company behind this software is MacKichan Software, Inc., and went out of business on July 1, 2021 (http://www.mackichan.com/index.html?products/sw.html~mainFrame):

MacKichan Software, Inc., after providing word processing software for those who speak the language of mathematics for forty years (under several names), closed its doors on June 30, 2021. This marks the end of sales and support for the MacKichan Software products.

All owners of Scientific WorkPlace, Scientific Word, or Scientific Notebook should have a serial number that was included in their purchase. This number is also included in the license file for your installation as the last line in the file. If you need to install your software on a new or different computer, you will need to re-activate the software on that computer using that serial number. The software can be activated as before, using the Help/Activate menu item. This contacts the MacKichan Software licensing server, which we will keep running for at least two years.

Thirty-day trials of all of our products are discontinued. Trial serial numbers will no longer work to activate the software.

Not the answer you're looking for? Browse other questions tagged typography latex-misc big-list or ask your own question.

3
Is Latex the only choice, is there any (emerging) alternative?
887
LaTeX Editors/IDEs
188
Why is LaTeX so complicated?
13
Using siunitx when submitting to APS
29
Future of TeX and LaTeX
9
Which typesetting programming language is most used in publishing?
6
What visual features of typeset plain text are unique to LaTeX compared to InDesign, QuarkXPress and other WYSIWYG typesetting programs?
5
Setting variables in LuaTeX texconfig?
2
If LaTeX tools implement the TeX features from scratch

102
What professions use TeX/LaTeX besides CS?
11
LaTeX-related events
25
Is LaTeX outdated?
149
LaTeX in Industry
12
LaTeX motto/slogan
48
All uses of LaTeX (I never use LaTeX except for ...)
5
Free alternatives to the fonts used by Bourbaki