I am trying to construct a portion of an ellipse that connects point P1 and P2 but I don't know anything about the ellipse besides that F is one of the foci. All I know is that an elliptic arc connects the two points. I tried using \draw let ... and then specifying the start and end angle but I don't what the x radius and y radius would be nor the orientation of the ellipse. Any ideas on how to construct this? I have a similar question which never received a definitive answer since it was more restrictive. That post can be found here ellipse intersecting a circle but I was just winging it there. 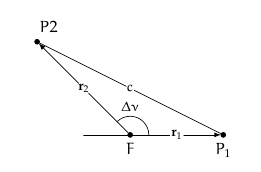 Well, as Jake commented you have an underdefined problem so the best approach is the manually placed arc and be done with it. Because to automate it, you have to supply more info. A possibility is to make a quarter arc directly 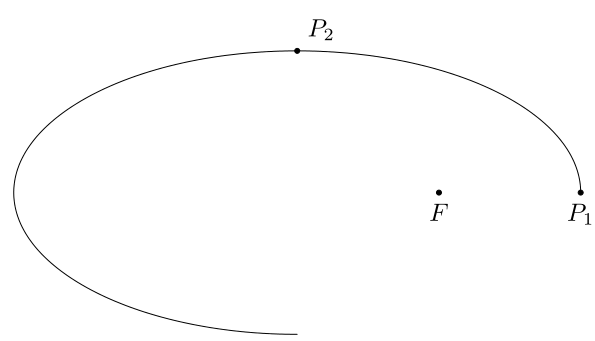 A possible visual solution is to add 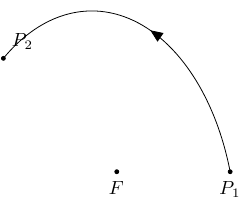 Not the answer you're looking for? Browse other questions tagged tikz-pgf intersections or ask your own question.

26
Tikz: Draw simple shortened curved line between two coordinates in tikz
82
Increase the thickness of node border in TikZ
14
How to define the default vertical distance between nodes?
14
TikZ: Drawing an arc from an intersection to an intersection
9
Line up nested tikz enviroments or how to get rid of them
1
Ellipse through defined points
8
Drawing an arc between 2 nodes with a specific radius
3
Marking a point on parabola (like ellipse)
6
Regular polygon VS circle shapes in TikZ