Why this " (one symbol) works as one double quote as well

According all the tutorials I could found, I need to use

to produce the double quote. However, it seems that

Is this supposed to be? If so, why none of tutorials mention this?

The character " seems to produce the right quotes, but this is not really true. There are two cases.

Look at what happens with these apparently identical inputs:

Can you spot the difference? In the first case a normal interword space is produced after the quotes, in the second case there's an extended space, which is what's expected after a period (preceding or not the quotes), of course assuming "non French spacing".

Add \usepackage[T1]{fontenc} to the input above and you get

The problem with the extended space seems to have disappeared, but this is not true: the fact is that the glyph produced by " is wider than the curly double quotes. But it's even worse than before, because now the quotes are straight and not curly, which is unacceptable from a typographycal point of view.

All tutorials recommend '' for producing closing double quotes and they are fully right.

Thanks for pointing it out. Here's one MWE to illustrate the problem.

The following is the output. 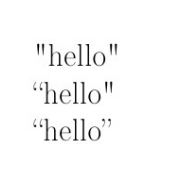 If we don't use fontenc or fontspec, (which is highly recommend against), all three of them give correct result for right quote, shown following: 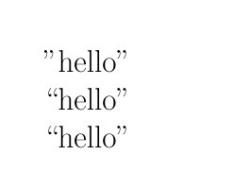 Use what's mentioned in all the tutorials, and include fontenc or fontspec.

39
Replace "quotes" with „quotes“?
11
Using \lccode / \lowercase{...} trick with double quote mark
3
Backward opening quote in Mac
6
Is there an alternative way to double quote in Latex?
5
Double-quote produces guillemets in emacs
3
Increasing the kerning around ' (apostrophe) but not inside the " (double quote) in microtype?
2
How can I get matching curly double quotes using listings?
6
Quotation Mark Pairing