How can I subdivide in cases with square brackets?

I mean I want to write:

with square brackets, not braces.

You could patch the cases environment, the way Thorsten showed or using the etoolbox package and \patchcmd. However, it could be better to preserve the original cases environment and to define a new one for that purpose. Here is a way, very similar to the original definition, but also using \lbrack instead of \lbrace, I calles the new environment sqcases:

Though it looks a bit complicated, it's very straightforward: I took the original cases definition of amsmath.sty, wrote sqcases instead and replaced \lbrace by \lbrack. I had to use \makeatletter and \makeatother because of the @ symbol in the original amsmath commands.

After loading etoolbox, the respective internal amsmath macro is changed to use \lbrack instead of \lbrace. It's a bit hazardous to patch internal commands, but it's a quick way and may even work after changes in amsmath while our new definition could become different to cases then. At least it's good to know such methods.

It only requires a slight modification.

This is the original code from amsmath where only \lbrace has been replaced by \lbrack.

A Plain "extension" to support such constructs: 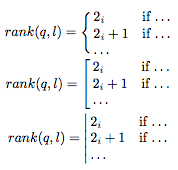 In addition to the answers above I would like to present another comprehensible solution to the problem.

Not the answer you're looking for? Browse other questions tagged math-mode amsmath delimiters cases or ask your own question.

846
What do \makeatletter and \makeatother do?
2
How to shorten equation left bracket?
1
How to denote a logical matrix (mask) as used in image processing?