Sans-serif to go with EB Garamond (no math)?

Suggestions for a good sans-serif font to go with (complement) EB Garamond? Math and non-Western European support are not required. Text is fiction, not academic or scientific. English with an occasional word or phrase in French.

I'm using LuaLaTeX from TexLive 2013 on Windows 7 but that should not matter.

Too many choices, too little time.

Assuming the usage will be for headers or elements like folios, my choice would be Optima, which has a classical structure and so won't clash too much. If that's not to your liking, Syntax is a choice advocated on Typophile for this sort of thing, but its higher x-height would require some scaling down.

If you don't mind an organic sans serif, you could use Linux Biolinum which is part of the libertine package; Libertine is a more modern (but still classical) typeface than Garamond, but the pairing still works rather well in my opinion (and if you want to pair a Garalde typeface with a sans serif, you probably don't care that much about period accuracy) -- although I wouldn't use bold sans (a double anachronism) for headers:

The current libertine package automatically uses otf by loading fontspec if the document is compiled using xelatex or lualatex, but the above works using pdflatex as well.

If you prefer a more classical sans serif, or really would like to use bold sans, you can try Pablo Impallari's Quattrocento Sans:

I think the typeface is okay for headings even in bold, but too wide to use in the text body.

Another good choice could be Myriad or Frutiger. Myriad and Minion come with Adobe Reader, and work quite well together (see What best combination of fonts for Serif, Sans, and Mono do you recommend?). There are plenty of nice choices, though. If you don't need bold, Calluna Sans is free, as well as Fontin Sans.

You haven't told us just how the text strings set in serif and sans-serif will be juxtaposed. If the serif and sans-serif text strings can occur side by side in running text, I'd apply the following criteria to guide my search for a suitable sans-serif: (a) match the x-height of the Roman font (very easy to achieve via fontspec's option Scale=MatchLowercase), (b) the sans-serif font shouldn't be all that compressed, (c) it should feature a dual-level g (as opposed to a single-level g employed by Helvetica and Myriad), (d) it should have fairly slender strokes (unlike, say, Gill sans), and (e) still look sufficiently different from Garamond.

For my own writing work that involves Garamond Roman fonts (any "Garalde", really) as the main text font, I've found that Palatino Sans -- yes, there really is such a thing! -- works very well as a companion font.

The following screenshot shows several groups of font choices. In each selection, the first main text line is in EB Garamond, the second in the sans-serif of choice, and the third alternates words using serif and sans-serif. IMNSHO, Palatino Sans harmonizes quite nicely with EB Garamond, while still having a true "sans-serif" character as opposed to, say, Optima. Of course, Optima (also by Hermann Zapf, the creator of Palatino and Palatino Sans) has frequently been called a "serifless Roman font", as opposed to a "true" sans-serif font. 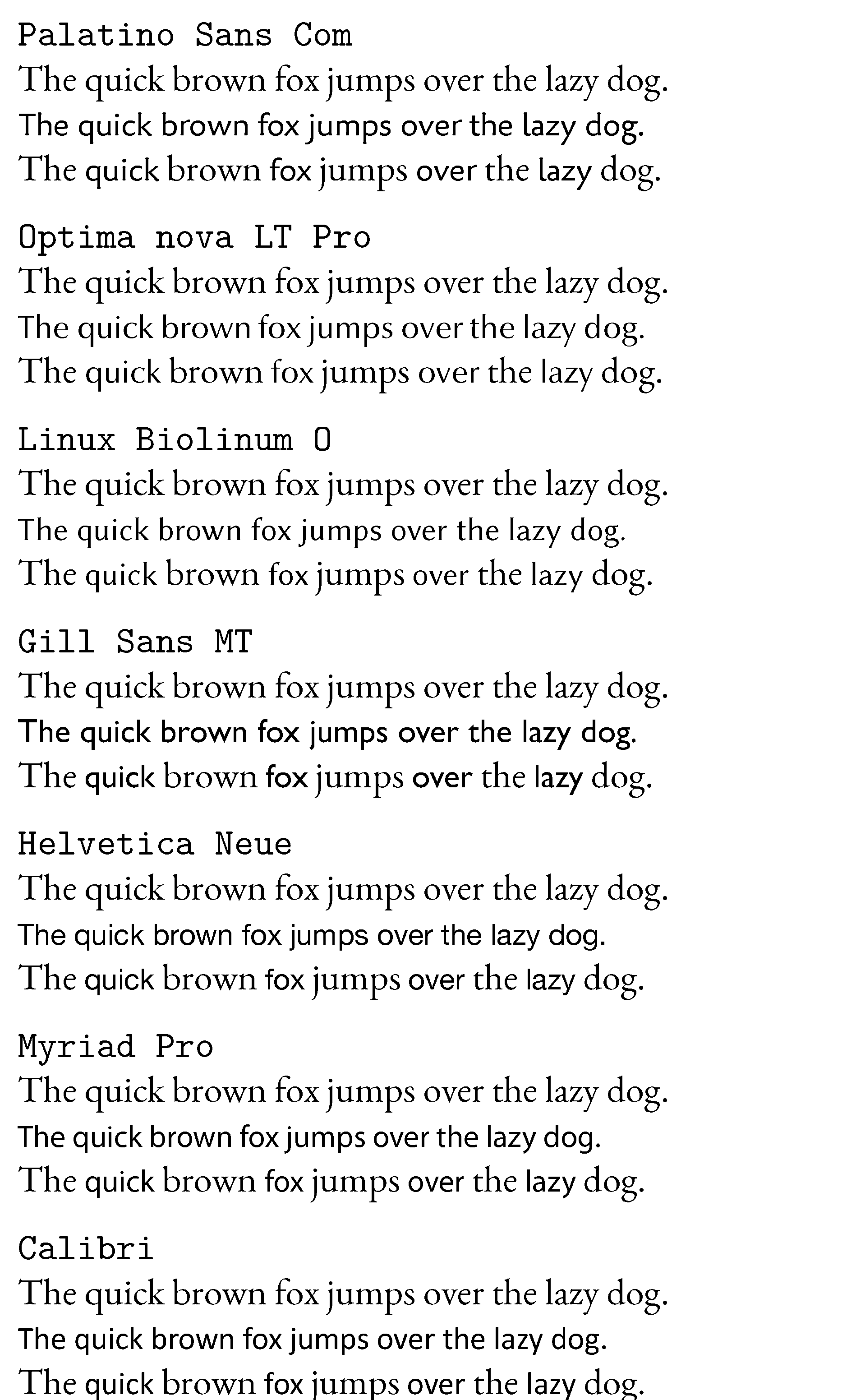 Typewolfe suggests pairing Garamond with Gill Sans, but here (along with two more links that my low reputation wouldn't let me submit) Helvetica (helvet or tgheros in TeX) is recommended as a companion typeface.

Not the answer you're looking for? Browse other questions tagged fonts luatex fontspec typography ebgaramond or ask your own question.

98
What best combination of fonts for Serif, Sans, and Mono do you recommend?