Huge matrix in my document. Possible ways to make it look better?

The following is the source for a matrix I'm using in my document:

The output looks very strange since the first four colums are wider than the last. But I guess I can't fix that, because otherwise the matrix would be too wide. Do you have any idea on what I could do to make the matrix look 'better'? Any suggestions are welcome. I have already thought of splitting the matrix up and only specifying the important 15x4 part. 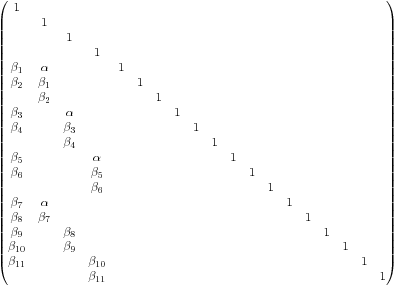 According to my belief that no array using \multirow can't be improved by removing it, here's a simpler variation to percusse's answer: 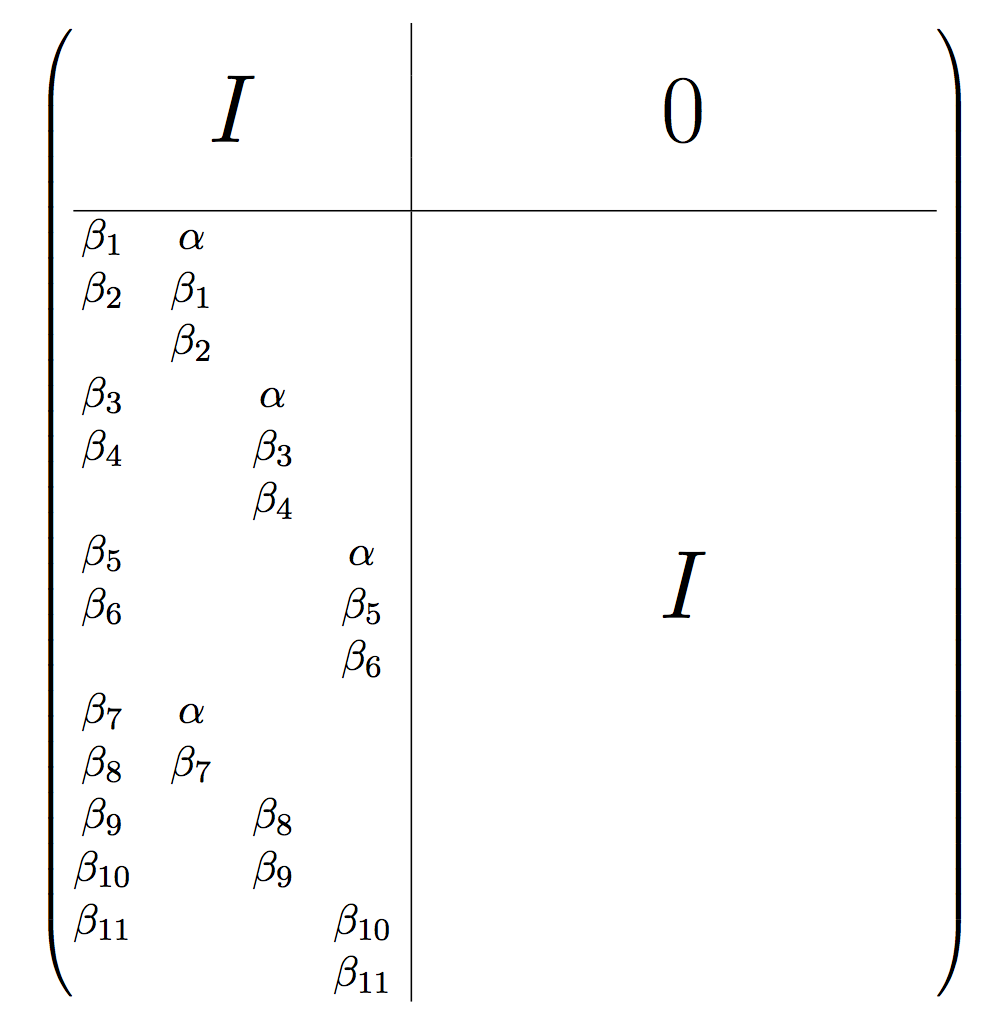 You can remove the identity elements and replace with I.I forgot to put I_{4\times 4} and similarly 15 but you can add it directly.

Still too big but at least it's consistent. I would really go a low rank representation of that 4 column nonzero part and make it a variable. 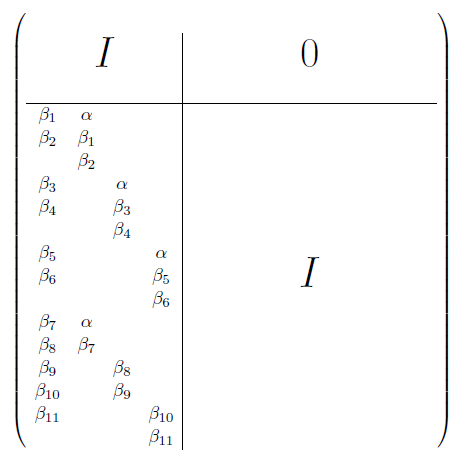 I'd tempted to write

In general these very large matrices are very hard for the readers to understand and keep track of. If like in this case, it can easily be split into blocks, then that would help readability.

Although I agree with the answers which try to group in blocks the different parts of the matrix (such as Percusse's or egreg's answers), I'll provide an example which uses TikZ to draw a matrix more similar to the original one.

Using a matrix of math nodes, it is possible to ensure that each node (cell) has the same dimensions, and thus have all of them evenly spaced: 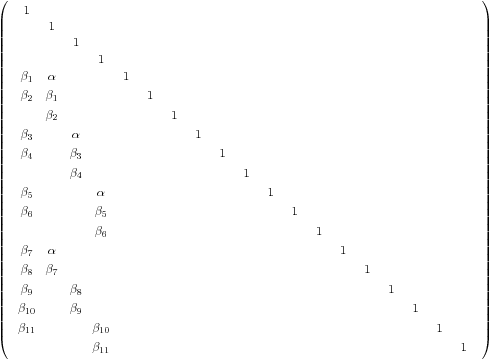 Now, being a tikz picture it is possible to draw lines which help to read the matrix. Each cell in the matrix is a tikz node which has a name automatically assigned, as M-y-x being y the row number and x the column number.

@Thomas noted in a comment that the line of 1s didn't look straight. I was unable to notice it, so I added the option nodes=draw to the matrix options. This was the result: 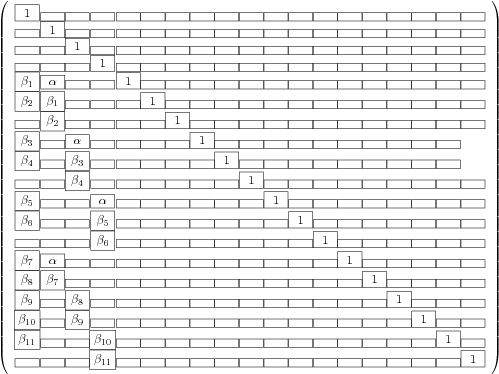 Now it is clearly visible that there are small horizontal gaps between some boxes, apparently due to the elements \beta_{10} and \beta_{11} beingh slightly larger than the minimum width used of 4.5ex. And, more important, not all cells have the same height, and this produces different distance between the rows. It is clearly noticeable that the first three rows have no vertical gaps between boxes, while the others have. (Incidentally I also discovered that two rows had the last cell missing).

So, enlarging a bit the minimum width and giving also a minimum height, the following result can be achieved: 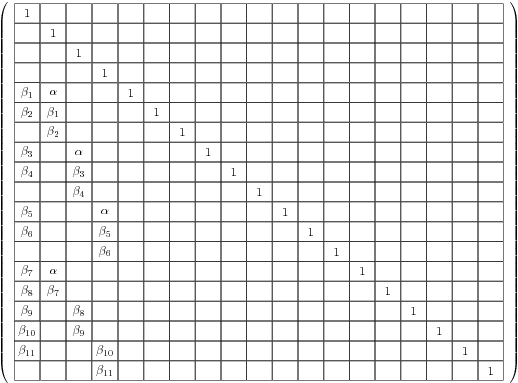 The above figure was produced by the following code (I grouped all node specific options into nodes keyword):

Just to test your eyesight, there is the same figure without draw option: 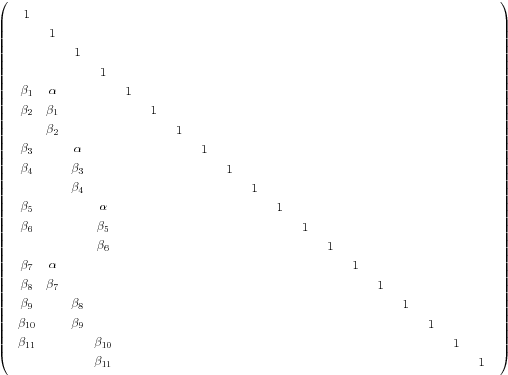 Here's an attempt. First step, replace pmatrix with array so you can insert rules. Then we make the first few cols equal-spaced by putting in phantom elements equal in width to the widest thing appearing, beta_11.

Since the right-hand side of your matrix is essentially a rectangular block of zeroes above a unit submatrix, I refer to them as such and delineate them with horizontal/vertical rules. You can choose other symbols to refer to the unit matrix like a math-blackboard font 1 if you like, or use 1s in the top left and botom right corners and diagonal dots in between. Adjust the length of the right-hand part as desired.

You may want to mention in the accompanying text somewhere that the matrix is square and that (whatever symbol you choose) denotes a unit submatrix. 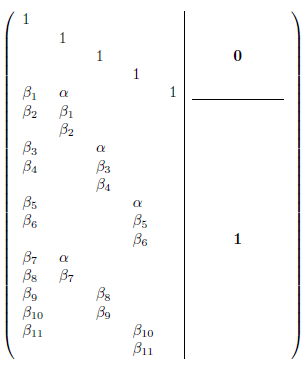 Not the answer you're looking for? Browse other questions tagged math-mode amsmath matrices or ask your own question.