What does the # symbol do in LaTeX?

I know most of the effects of the special characters in LaTeX, like \ is used for most commands, or $ is used for opening or closing the math ambience, but I don't know what the symbol # does, and I have seen it in some lines at commands for the creation of personalized packages... here is an example of it:

but I still don't understand what the # symbol does... so if anyone could explain it... also what does the \@ command do?

Amongst other things (that most likely falls outside the scope of this question), # is used to reference arguments. In a general setting,

allows you to reference any of the <n> arguments inside <stuff> using #1 (for the first argument, which is optional in this case), #2 (for the second argument), ... #n (for the n-th argument) up to 9. There are ways to extend this, but it is highly discouraged from a user-experience point of view.

The above syntax also holds for \renewcommand and \providecommand (using LaTeX2e), and translates seamlessly to \newenvironment and friends as well. There is also no distinction between the use of arguments as being optional or mandatory.

Here are some examples: 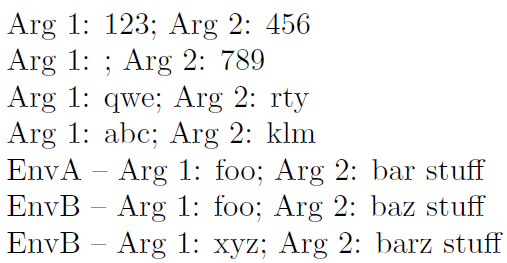 For the latter question, see What do \makeatletter and \makeatother do? - since @ is special. That is, since you're using @ somewhere inside your macro definitions (it's okay in the replacement text), then you need to be careful. To that end, wrap \makeatletter...\makeatother around it if not used inside a class or style file.

Specific to your example:

In the outer part you have

This creates a macro \mytitle that takes one optional argument (which is empty by default) and one mandatory argument. As such, it's called using \mytitle[<opt>]{<man>} (where \mytitle{<man>} is equivalent to \mytitle[]{<man>}). In order to gain access to the arguments, you reference them as #1 for <opt> and #2 for <man>. If you have macros with arguments inside other macros, the argument references "double" at every level. For more on this, see What is the meaning of double pound symbol (##1) in an argument?.

The use of @ in macros is not possible in general, since control sequences are only allowed to contain letters (as designated by their category codes), and @ is not a letter. So, in order to create a macro of the form \@mytitle, you need to make sure @ is a letter first. Why would one want to go through the hassle if it requires additional care? Since it requires special care, there very little chance that other users may interfere with it, or even have packages clash with one another over the same macro names. For example, while \titlename might be a very common choice for a title name holder macro, \title@n@me might not be.

Not the answer you're looking for? Browse other questions tagged macros symbols or ask your own question.

866
What do \makeatletter and \makeatother do?
184
Escape character in LaTeX
70
What are category codes?
82
What is the meaning of double pound symbol (number sign, hash character) ##1 in an argument?
3
How to make work macros work as values in parameters of psbarcode?

14
Why duplicate symbol commands
234
What is the best symbol for vector/matrix transpose?
9
How to make a cross symbol in LaTeX
4
How/Where to find such special symbol/character?
5
Explain this code to me: Doubled delimiters
11
What's the Difference between Two Single-Quotes and One Double-Quote?
1
Several questions about the question "Attractive Boxed Equations"
1
what do these commands do
6
Symbol for \gg or equal