I am using the fancyvrb package in LaTeX2e.

I have chosen to display line numbers as I am displaying some code.

(The code I am displaying is Maple, which unfortunately is not supported by the listings package).

As some of the lines of my code are too long to fit across the page, I break them manually in my .tex file.

In such circumstances (i.e. of these manually-broken lines with explicit break and continuation characters), I would like to write a special numbering macro that appends a lower case letter to the line number assigned, (following an alphabetical sequence starting with a ), and ending at the last line of continuation.

Following such a broken line of code, the numbering for the next line of code would then resume normally and the lower case letter counter would reset to a.

I have looked carefully through the fancyvrb package documentation but to write such a macro is beyond me. I have also tried to find samples of macros performing similar tasks, however I have been unsuccessful.

Any help would be much appreciated(!)

This may not be exactly what you asked for, but perhaps you can adapt. In this case, a user-settable continuation char is placed in position 1 of a line if it is part of a split line, rather than at the end of a line and the beginning of the next line. The user may also set the label width of the numbering scheme.

This approach is a modification of the verbnobox environment of the verbatimbox package. Here, I call it fancynum. 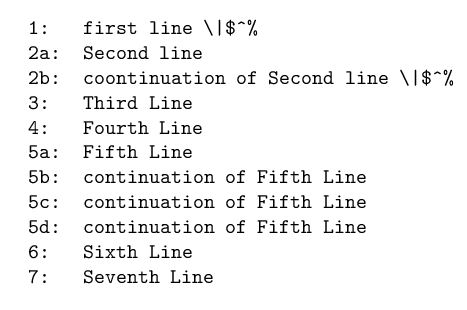 Not the answer you're looking for? Browse other questions tagged macros counters fancyvrb or ask your own question.

11
Enforce a line-break inside \lstinline

2
Macro for tabbing with complex line breaks (or similar environment)
9
Parsing a macro argument character-by-character for conditional execution
7
Break line within a macro while writing to a file
5
Alternative commandchars in fancyvrb
3
fancyvrb: multiple actives
2
Line breaks introduced in database export as extra lines in table
3
Creating a macro that conditionally turns on an \iffalse and \fi
2
TexStudio macro
3
fancyvrb dynamic label
3
Don't take white space into account when checking next character