I need 2 different TikZpictures with the same bounding box (the one of the first TikZpicture) because I need a perfect vertical alignment of the subfigures side by side.

Please, how can I handle this?

If you don't know the dimensions of the first picture you can get them from the current bounding box node. Using remember picture you can then access this information in the second node.

The code below will set the accept same bounding box for the second picture.

This works if both pictures use only positive coordinates. Adjustment must be made if this isn't the case.

The \fbox commands are only to display the bounding box and are not really required.

Another way to do it is to use a single tikzpicture environment and one scope environment:

Then the points plotted at (x,y) in each scope will be exactly 5cm apart.

The code of Martin is correct but if you want to know the width and the height of the picture, you can use

Now you get the width and the height of picture with

The height is \dp + \ht. I don't know if pgf/TikZ gives the height and the width directly.

Perfect vertical alignment of two independent tikzpictures can be obtained with a tabular with m columns (from array package) or with a sidebyside tcolorbox. Following code shows both options: 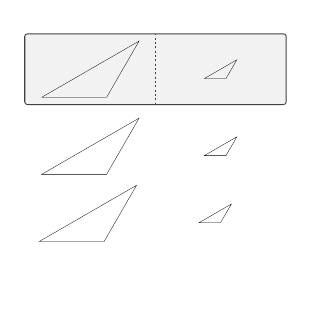