how to draw a diagram that forks out, then joins in the middle then forks out again?

ref comments: I've slightly corrected the terminology and the title. I am using the term diagram now, instead of tree, and I am just asking on how to draw this diagram in Tikz. Any tool or library would be OK. I used qtree since that is what I know now, any other method is welcome.

I'd like help/hint on how to draw this diagram 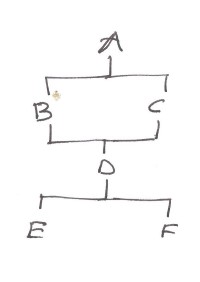 The part I am having problem with is how to make it go from B C children to one node D then fork out again.

This is latest attempt. I tried also to use grow'=up in the middle, but could not figure the syntax without splitting it into two pictures. I wanted it all to be one picture.

Here is a general diagram as requested. But I am not really asking someone to draw all of this for me in Tikz, I was just asking for the technique on how to join then fork in a middle of building a general diagram since all the examples I've seen seem to show forks at each node. 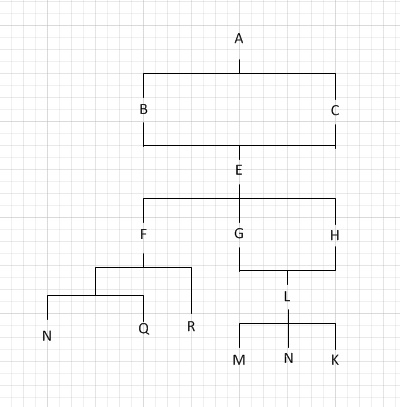 In addition to the solution suggested by @Qrrbrbirlbel in the comments, playing around a little bit with \usetikzlibrary{positioning}, defining some \node's in the trees that you had already provided, and using \coordinate allows you to get the output that you want.

It might not be the most elegant way to do so, but as has already been pointed out in the comments, this is not really one tree.

Here is an idea for the second, bigger diagram.

It uses (unfortunately) only TikZ. I have used my paths.ortho library for the |-| path (which has been improved with the from center option for the hvvh family in combination with the ratio option) and my positioning-plus library.

The latter is used for two different/improved usages of the below key.

As the children’s position are determined in relation to the parent and their anchors (and not like the positioning library’s below=of that uses the border), we can mimic this behavior by using the on grid option of positioning. The positioning-plus library checks for a factor delimited by : before the of part. This makes it possible to place a node double the usual node distance apart from another node. This is used for the placement of the E node (in relation to A). This will fail for the L node as this is not centered below E but below G and H. Thus below=of (E-2)(E-3) can be used (this works by creating a pseudo node around E-2 and E-3 similar to the fit key).

The connection is done by an edge style that is kind of reversed to the edge from parent path that is used with child automatically. The parents style helps us to connect many parent-children.

The text depth has been set to zero due to Q’s depth. 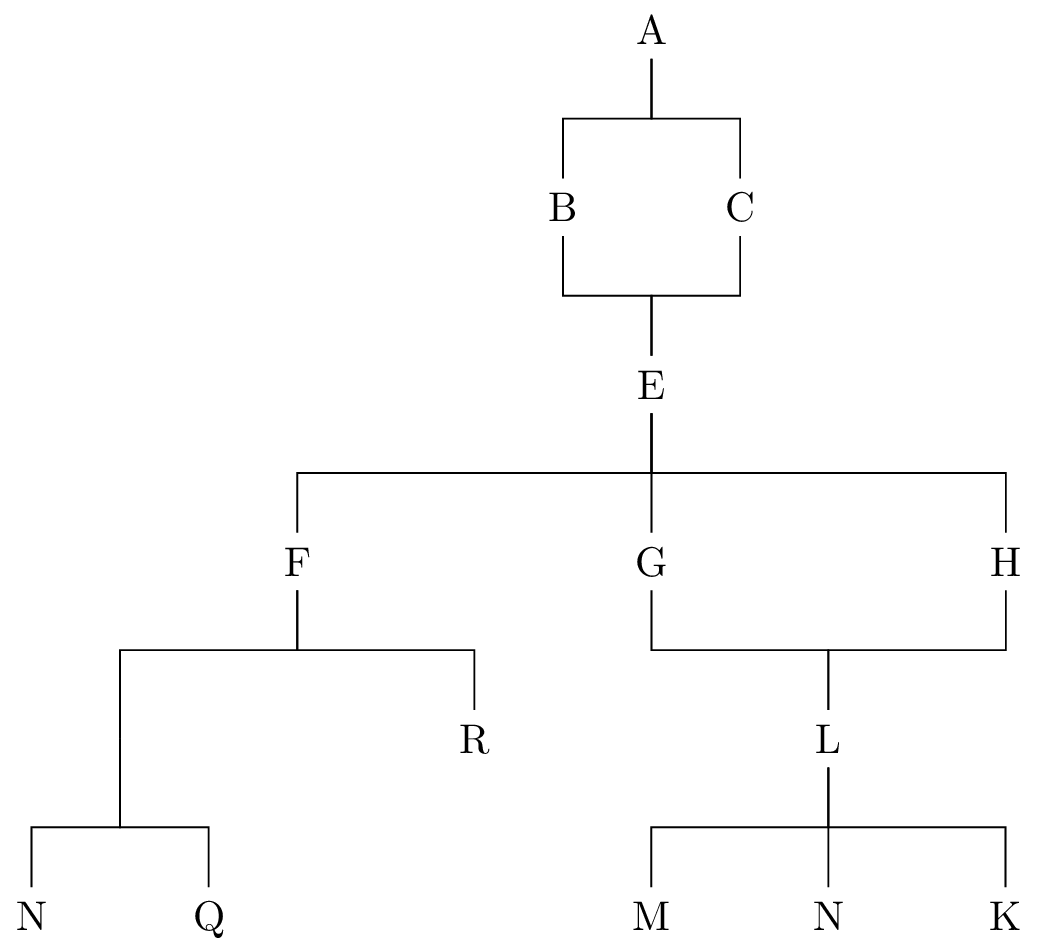 Not the answer you're looking for? Browse other questions tagged tikz-pgf trees tikz-qtree or ask your own question.

13
Rotate a node but not its content: the case of the ellipse decoration
17
How to define the default vertical distance between nodes?
16
Numerical conditional within tikz keys?
1
Adjust edge endpoints depending on node label
15
TikZ: Drawing an arc from an intersection to an intersection
12
Drawing rectilinear curves in Tikz, aka an Etch-a-Sketch drawing
9
Line up nested tikz enviroments or how to get rid of them
3
How to draw a square and its diagonals with arrows?
2
How to draw a tree diagram using tikz in which the nodes overlap?
2
Arrow between BTrees