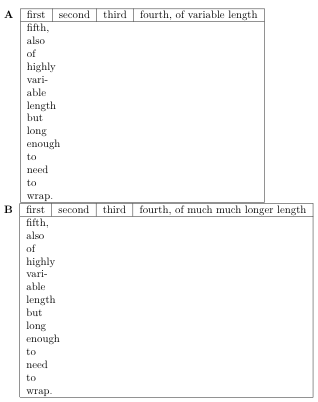 3
Know the cell width with tabular* or include a paragraph box without specifying its width
4
LaTeX p cell width
8
Passing the current column width to a macro (for table headers)
3
How to measure the width of items in itemize environment?
0
Table with width assignment
3
How to tell a column to span half the width of the table
3
Table with different column numbers - full width
10
How to automatically calculate the width of a multicolumn in a table based on the combined widths of the columns that are merged
0
Wrap multicolumn in a tabulary table
2
Tabularx with calculated column widths that use the whole table width