How can I setup my TikZ-Editor to enable preview?

I use MacTeX 2013, installed with the ISO file.

Could you give me some clue about how I can configure this software?

The error messages says that the LaTeX command is incorrect, which it is by default (more or less). You either could chang your global path variable in a way that TikZ-editor finds pdflatex, or you tell TikZ-Editor where pdflatex is installed. WIth MacTeX, the command should be 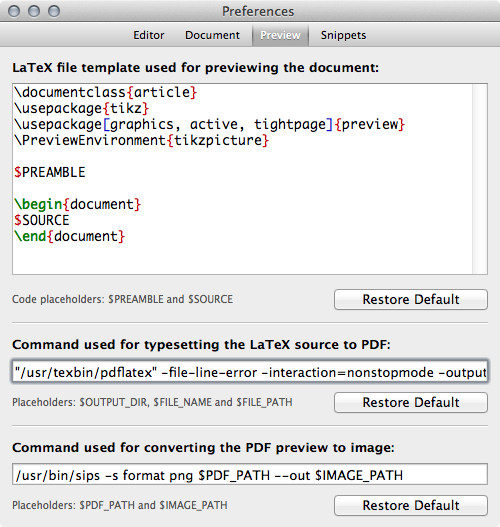 The pdflatex executable wasn't in /usr/texbin/pdflatex on my system. A more general approach would be to locate the file on your system by typing the following command in terminal on Mac:

On Windows the command would be where pdflatex

It then gives you the path to pdflatex, which in may case was:

Not the answer you're looking for? Browse other questions tagged tikz-pgf compiling editors mactex or ask your own question.

3
Problem with Preview using TeXlipse in Mac OS Snow Leopard
3
auto-pst-pdf and TeXstudio under MacTeX
1
TeXlipse “Preview Document” not building document from Eclipse - Mac OSX
1
Problem with gnuplot on Texpad
4
How to set the interactive editor in TeXLive? lualatex bug?
1
“Missing $ inserted” with LaTeXiT on macOS
0
Installing Kile and linking with Mactex