embed a terminal command in a beamer presentation

I know this may be extravagant, but I was wondering if it was possible to embed a terminal command in a beamer pdf that can be launch by clicking on it. My idea is that during my presentation, I could just click on a button displayed on my slide to launch a program. This way, I don't have to quit the presentation and open a terminal window.

I'm using mac OSX and I need the view the pdf with Adobe Reader. Is there a way to do it without using php forwarding like in here?

I tried this code:

And Adobe Reader says it can't find an app to open the file. I also tried opening the file with Safari and it shows the script file, it doesn't run it. This is annoying because if I click on the shell.command file through the Finder, it simply runs it, as it should.

Doing this in combination with listings gives you a pretty nice solution: 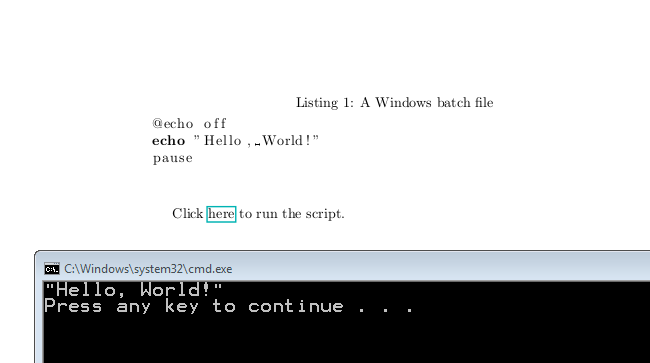 This should also work with Beamer.

If you're working with a UNIX system, note that bat is Windows-only, since Windows doesn't use a 'real' shell. With UNIX, give it a .sh extension (if you want to give it one at all). You might also need to do a few more things:

Please note that, as of now, this solution may not always work on Windows.

Note also that the handling of run: protocols can vary from viewer to viewer. Some may not support it at all due to security risks, but it has been confirmed that Evince and Skim support it.

Ok here's how to do it on OSX. Big thanks to everybody, especially to Sean Allred and Daniel.

Using .command instead of .sh will make the script executable by the system.

Go in terminal, cd into the directory and give the script the permission to run with:

Use Skim to read the .pdf file because different readers seem to interpret differently the run: command.

Not the answer you're looking for? Browse other questions tagged beamer mac or ask your own question.

11
A button that runs an external program from a Beamer PDF presentation
8
filecontents* cannot write to file in Windows
2
I want to open a video file in vlc when I click a picture
0
Link to .mov file not working using href in OSX and beamer

20
Thumbnails of other frames in beamer
6
Trying to embed mp4 in a Beamer presentation
5
Powerpoint live presentation functionalities with LaTex beamer?
2
How do I embed a mpg video in Beamer presentation using `media9`?
5
Read video (mp4) with beamer on Windows with the multimedia package