The diagram below shows an architecture for generating books using a dynamic preamble. The top part of the image shows the database relations between a book theme and its preamble. The top set of numbered items represent:

When the user selects a theme, a database query dynamically creates a preamble. The user can select a theme then tweak it by overriding the default snippets, as illustrated by the browser wire-frame (i.e., palette, font, photo, etc.). 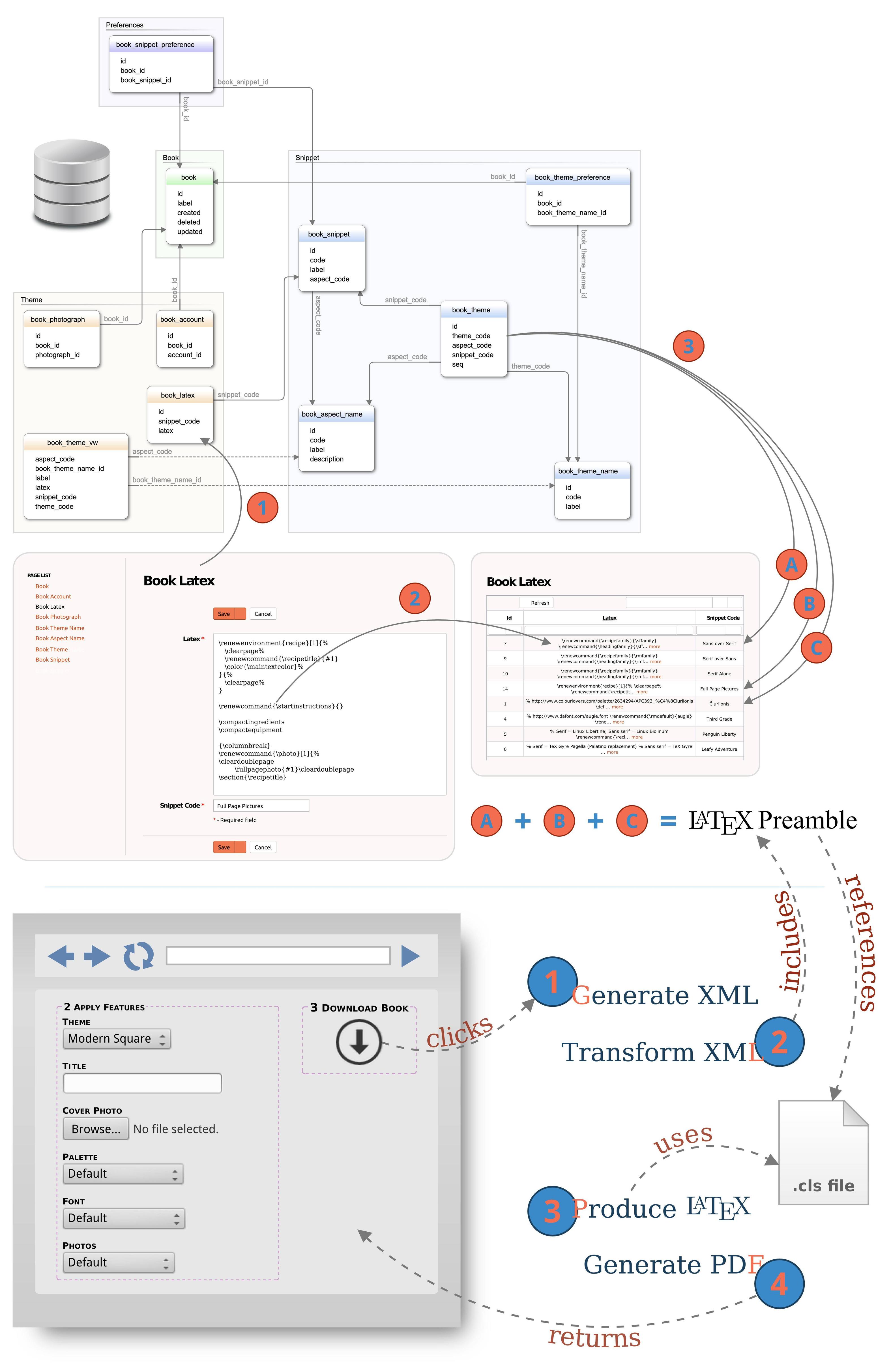 The user creates a book as shown in the diagram. The system performs the following actions when the user clicks the "download" button:

Although the LaTeX preamble is almost all database-driven, parts are coded in XSLT, such as the \documentclass declaration. This is trivial to parameterize.

I would like to revise the architecture to allow users to create version of their documents for different devices and file formats (e.g., ePub, Mobi, Kindle, PDF). There is no math, but any images must be fixed on the page (i.e., they cannot float; here, definitely).

Given the constraints of such an architecture, what approach should I take to convert the LaTeX documents for various eReaders such that the output produced is as high a quality as possible, and as true to the PDF layout as possible?

I have tried to convert the LaTeX, as it stands, directly to XHTML. This failed in spectacular ways using Hevea, latex2html, pandoc, and mk4ht (htlatex), mostly due to the dependency on the .cls file.

My thoughts are that I'm going to have to do the following, at least:

Also, there is an installation script (install.sh) that drops dependent artefacts into specific directories. It probably won't work for other LaTeX installations without modification.

This section describes the errors I encountered, from memory.

Could not parse the .tex file.

Could not find the .cls file, despite it being located in TEXMFHOME. The pdflatex program can generate the PDF without any issues. Generates many PNG images that are difficult to read, even though the content is mostly text:

Was able to generate HTML documents, but there appear to be some UTF8 encoding issues (the output is gibberish). There are also image scaling issues (i.e., the images didn't shrink). Not sure why the result is gibberish, as it is UTF8-encoded:

Requires the .cls file be converted to .hva. The .cls file has a dependency on memoir and enumitem, which aren't currently implemented.

Generates a number of warnings and some errors, such as:

Although it can initially find the .cls file, it cannot open it:

I am leaning towards a non-LaTeX solution. Since XML and XSLT are already part of the architecture, creating a book using DocBook might be an easier path at this point. There are a number of supporting tools, and DocBook readily converts to formats such as EPUB2, EPUB3, HTML, and more.

I am able to compile the example including the indexes using tex4ht, resp. make4ht (see installation instructions). The result isn't much pretty, some css and configurations are needed and also images are missing: example-book.html

But it is something you can build on.

I had to make some modifications to the example-book.tex:

This code uses imakeidx instead of memoir for indexing. I have some configuration for imakeidx, imakeidx.4ht which I use to process the index with xindy and tex4ht to get correct links from the index to terms location:

and xindy module to process generated with this method, imakeidx.xdy:

Now we are able to process the file with command:

Last problem is huge amount of empty images, which are generated by tex4ht. I have found that this is caused with wallpaper package. So you must edit the file recipe-book.cls to comment out wallpaper.sty when tex4ht is running:

You will probably need to add some configurations for emulating missing functionality, but the example compiles without errors for me.

Not the answer you're looking for? Browse other questions tagged pdftex document-classes preamble xml latex2html or ask your own question.

4
PDF's not working in LATEX
6
Producing "glossy" documents
4
Modular LaTeX document preambles and class files
2
texlive-fonts-extra + \ssfamily + microtype + [T1]{fontenc} = pdflatex crash?
2
Getting user defined constants into the preamble
2
How to Import Images into Anki with LaTeX?
0
I cannot create pdf file with the messages, !pdfTeX error: pdflatex.exe (file nanummjbae): Font nanummjbae at 720 not found
6
How can I convert a TeX file to Microsoft Word or LibreOffice format?