Is there a way to create a single document that will process a LaTeX file in two different ways (different preambles) and produce two different outputs.

Specifically, I want to produce a set of classroom slides, one for my use and one to be made available to the students.

The student version would have the overlays flattened and place 4 slides to the page. I hope this makes sense.

This answer doesn't address your particular beamer problem, but rather discusses the general problem: developing a method for conditionally compiling a source document in two vastly different ways.

We do this with my organization's report stencil. It allows, with the change of a single word, to change from an organizational report, with Covers, mandatory government forms, distribution lists, figures and tables in the text, into a manuscript form that eliminates the cover, cuts out the forms and distribution list, while retaining things like keywords (which were part of the government forms too), with tables and figures collected at the end of the report. Naturally, the margins, fonts, etc. are all different, as well.

The basic structure of the stencil would be something like this, which provides conditional compilation, depending on which of two settings is specified by \PREPARETYPE:

The key, however, to making such an arrangement work, is a style you need to develop that, in this MWE, is called TYPEA2TYPEB.sty. In particular, it's sole function is to create macros with the same non-standard names as occur in MyOrgClass and provide the manner in which they should be interpreted by \DOCTYPEB. In many cases, it may be a null definition {}, as would be the case for features of \DOCTYPEA that are eliminated by \DOCTYPEB. In other cases, a new non-null definition must be provided.

While we don't need it for our situation, I suppose one might also need a TYPEB2TYPEA.sty style to be included in the \DOCTYPEA macro definition, if the class employed by \DOCTYPEB also uses non-standard macros.

While this answer does not solve your problem for you, it lays out a method of producing two documents with vastly different formatting, that can be brought about by changing a single word in the source file.

I attach a figure, for what its worth, showing two documents from the same source. On the left is a manuscript form, on the right is an organizational report form. I do this just to emphasize the vastness of difference in results that is possible using this approach. 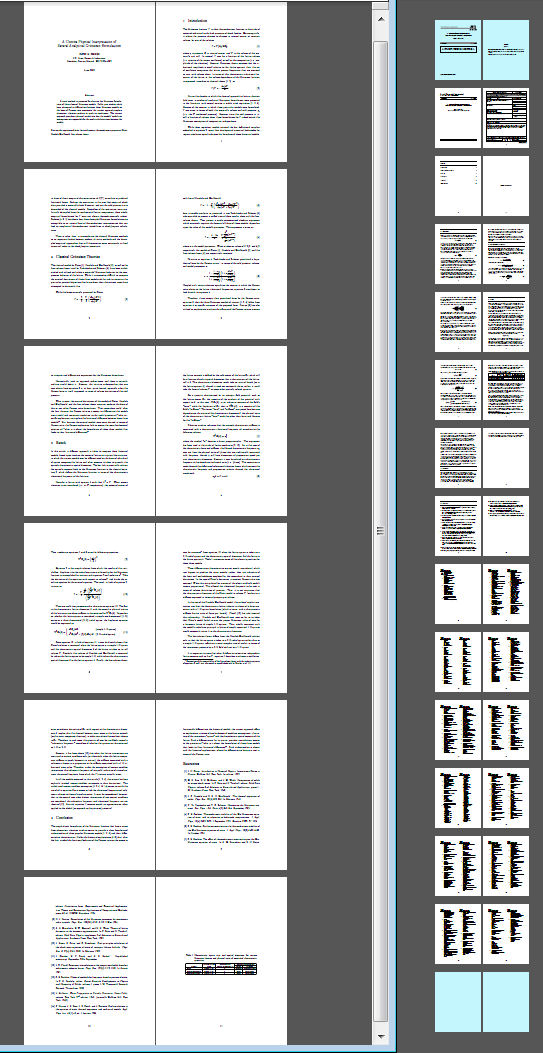 Not the answer you're looking for? Browse other questions tagged beamer conditionals overlays presentations or ask your own question.

199
Is there a nice way to compile a beamer presentation without the pauses?
35
Printing beamer slides?
10
Ignore commands when compiling
5
Manage a publishing house with Latex
2
Document branching
2
How best to produce mutltiple selective outputs in different styles from single input file

23
How can I distribute beamer overlayareas in handout mode across multiple frames?
10
Block in column has a too big margin from top
3
Program Tikz in Beamer
12
How can I check if the filename of a LaTeX document contains a string?
2
How can I use Beamer's \includeonlylecture{} to modify frame title content?
6
Beamer: handout/article mode - produce multiple copies of a frame with distinct overlay numbers
5
Two versions from same tex file