I'm trying to include a small snippet or Arabic script into my document. This works fine if I use the documentclass article, but I'm using the moderncv package as provided here, and for some reason, it won't play nice with any of the Arabic packages for LaTeX (that I know of). Note: my MacTeX distribution also packages a moderncv package, but I think it's different: they give slightly different results. In fact, my document, as it is, doesn't compile with this version of moderncv.

Anyway, I'm failing to include my piece of Arabic script. I've tried the following things:

I don't mind if the solution is ugly, I just want it to work. It's only a few words in an otherwise completely English document.

Here's a minimal document with the moderncv package that will reproduce the problem (on my machine, at least).

moderncv doesn't provide support for the old two-letter commands such as \rm, \it and arabtex needs those commands, so one option would be to declare them before loading arabtex, and then use \RL to transliterate the Arabic text; a little example (I have no idea what the Arabic text says; I just copied it from elsewhere): 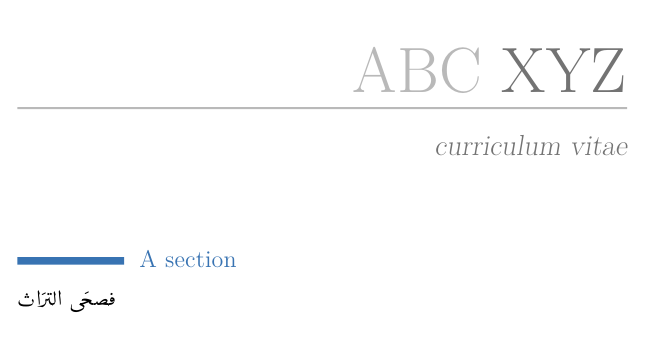 You'd better use xelatex -- arabtex fonts are readable, but kind of amateurish.

Yes, there are plenty of errors from microtype, but the document compiles in the end. I'd rather not play with moderncv internals, but it should be simple to remove those error messages.

Not the answer you're looking for? Browse other questions tagged pdftex moderncv arabic or ask your own question.